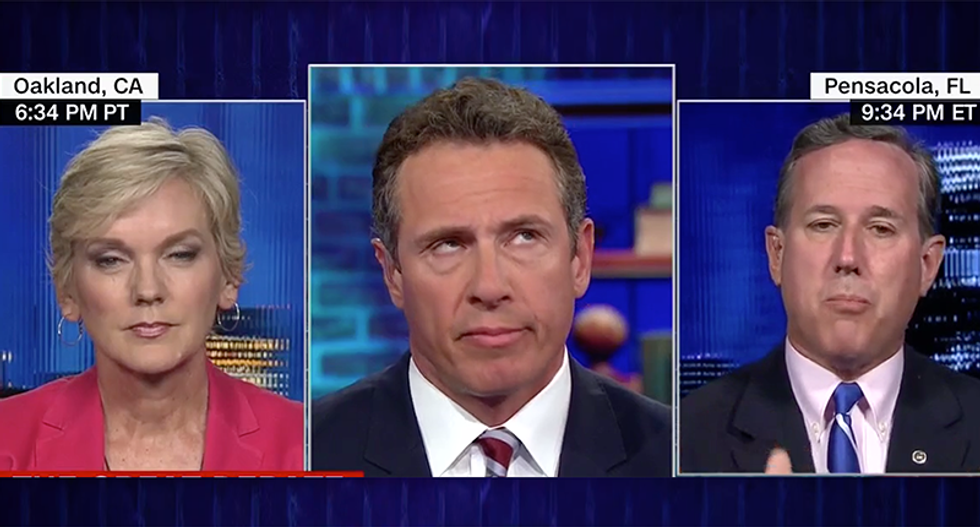 President Donald Trump's supporters are demanding civility after years of attacking Muslims, Latinos, women, LGBT people, Democrats, people who live in states that didn't vote for him, former President Barack Obama and a laundry list of others. But when former Sen. Rick Santorum (R-PA) tried to claim he wanted civility, CNN's Chris Cuomo called the bluff.

"There's a lot of reasons people on the left are acting, frankly, as badly as the president acts sometimes and worse I would argue," Santorum claimed.

Former Gov. Jennifer Granholm started saying "no, no no," as he tried to finish. "You cannot say -- Rick, I mean, with respect, you can't say that people who are not in positions of huge power, the most powerful person on the earth is equal to everyday people who are frustrated by that person's power and the policies that is are emanating from him. He has caused America to be in the cellar of international esteem. It's an embarrassment and we are all out here exhausted by the daily outrage because every single day there is another thing that is happening where we feel like he has taken our country from us."

She said that it's completely reasonable for people to be frustrated with Trump, his policies and the lack of civility from his supporters and former staff.

"But no one sets the tone more than the guy at the top," she said.

"Here's the problem with your argument," Cuomo began. "Jennifer, give me a second, because we get stuck here a lot in this conversation. You don't do what having a standard requires, Rick, which is to call out when it is not adhered to. You'll say you do it. You'll say you have and then you cause someone like me to do a lot of homework and I've got to tell you something, we've had a lot of full-throated conversations. I can't find a single transcript."

He went on to explain that at no point has Santorum ever said, "Donald Trump, Mr. President, stop it. Stop making people angry for no reason. Stop gratuitously abusing the truth like you did in South Carolina tonight, just like you did to get people to be angry. I don't want my kids to hear that. I tell my kids not to be that way. You have to be better. You're the leader of the country."

"Never. Not once," Cuomo said.

Santorum retorted that he should look at the transcripts more closely and claimed he criticized Trump tonight.

Cuomo said that Santorum does it in a "qualifying way" that "encourage him. It does, Rick, and I don't understand why, if it matters to you, why won't you --" Cuomo said before he was cut off with more excuses from Santorum.

"Do you think that the president has a responsibility in that dynamic?" Cuomo asked. Santorum said yes and everyone does. "No, do you think he has a larger responsibility as the most powerful man in the world?"

"I don't blame it just on Donald Trump," Santorum said.

"But he is using it to play an advantage and you're making him just a symptom of the situation," Cuomo shot back. "Do you think he shares more responsibility than the person who owns the Red Hen restaurant or whatever it's called?"

"She's the proprietor of that restaurant, she has an obligation to serve customers," Santorum said. "If that was someone -- if that was a conservative throwing a liberal out or someone who happened to be gay or black --"

"That's a fundamental difference, Chris. That's a fundamental difference," Santorum said. "I said very pointedly and I said it on your show -- when someone walks in and wants to buy a donut from the baker they can't say 'I don't like your kind' and throw them out. But there's a difference than saying is 'I want for you prepare something using your artistry to support my -- something that is against your conscience.'"

Cuomo called BS and said it was exactly the same thing. "You're saying when someone bakes a cake it is an artistic expression and like forcing Picasso so to make a paint a painting he fundamentally disagrees with as a matter of faith. And if they come in and say 'Give me a doughnut' and 'I don't want to sell you a donut and I'm gay and I'm afraid of you people and I hate you,' then that's not hock."

Santorum continued to maintain it wasn't the same thing, but Cuomo wasn't having it.