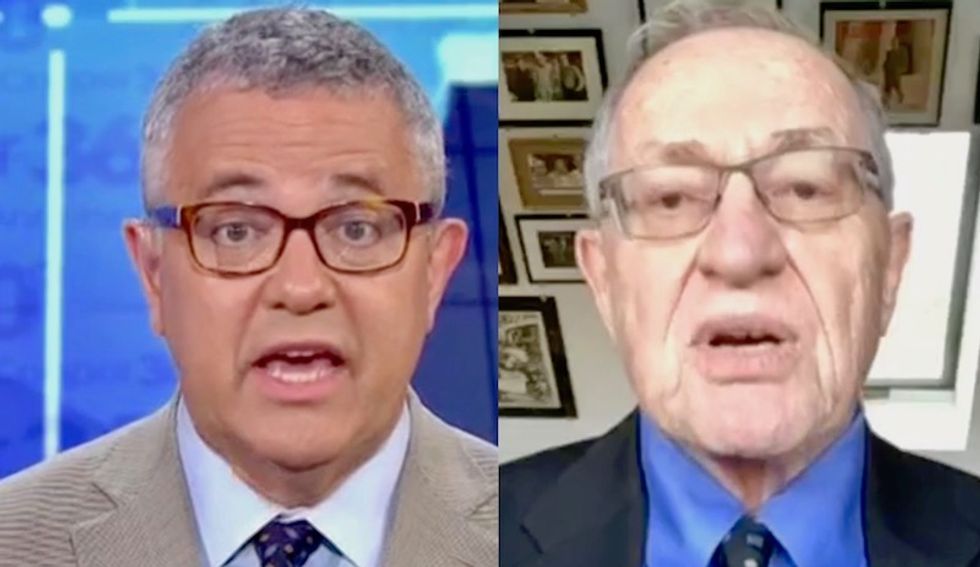 On Friday night, Dershowitz appeared on CNN where he painted Donald Trump's former campaign manager Paul Manafort, who violated the terms of his bail by allegedly engaging in witness tampering, into a martyr of the criminal justice system.

Dershowitz faced off against legal analyst Jeffry Toobin, who said this development "changes the complexion of the trial coming up" and that the move means "the pressure is going to ratchet up enormously."

"My own view is it is unfair for Manafort to join thousands of others sitting in jail with the presumption of innocence," he said. "We don't know whether he tampered with witnesses... This so undercuts the presumption of innocence when we put people in jail, poor or rich, without a trial, without a hearing. Based on a judge's conclusion and a prosecutor's assertion that they may have violated the terms of their bail... this is punitive and it's designed to put pressure on Manafort and it may very well work. The reason we get 98% conviction rates in some part of the country is because we put people in jail prior to trial."

"Alan, you can't make up the facts on what happened here," Toobin said. "[The judge] said the grand jury has indicted him for witness tampering... that was the basis for the fact that she revoked his bail."

Dershowitz claimed that grand juries "never" fail to indict and said that they should not exist.

"They never refuse to indict," Dershowitz maintained. "Paul Manafort is as innocent as you or I in the eyes of the law and he should not be in prison."

"Alan, you dislike grand juries and you've been consistent about that. But the grand jury has been part of the American legal system for 200 years," he said. "The same laws that apply for everyone else should apply to Paul Manafort.... All Judge Jackson did is apply the law that applied to everyone else."