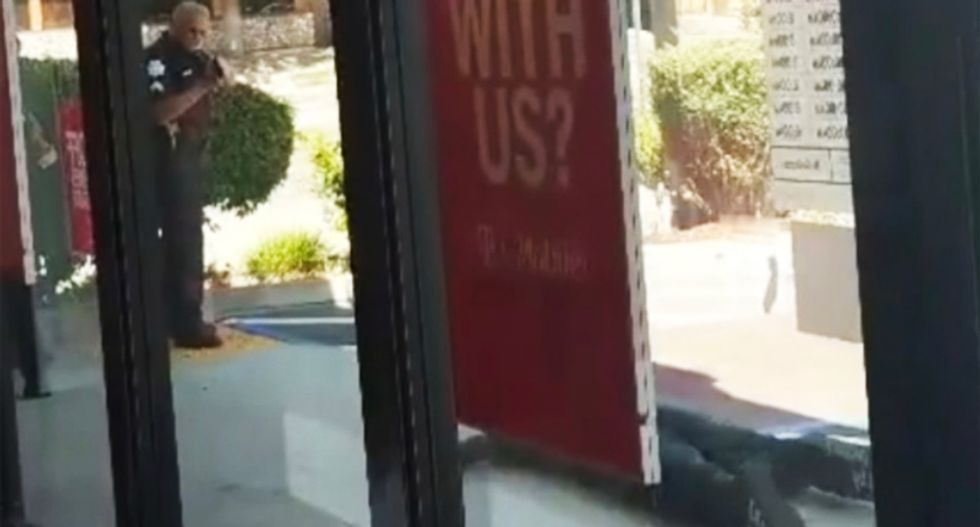 Dorian Johnson, 26, was held at gunpoint by police officers in California after being racially profiled by a T-Mobile employee who falsely accused him of burglary, reported the FresnoBee.

His uncle, Vincent Lemar captured a video showing him laying on the sidewalk with his arms spread out. Johnson can be seen crawling as police point a gun towards him.

"All I saw was guns pointed at my babies' daddy, and he was on the ground. I didn't know if they had already shot him," his girlfriend Gloria Bush said. "I said, 'Tell me what's going on. I know he's a good man. I know he wasn't here with bad intentions."

While Johnson is on the sidewalk crawling, he can be heard talking to Bush. "Calm down babe, let them do what they gotta do."

The video then shows the officer asking the men questions.

"What are you guys doing in there?" one officer asks.

"Just trying to get a new phone," Vincent replies.

"I don't see what made them call, and what would have given them the suspicion they were going to get robbed. We weren't up to anything," Johnson said. "It's just crazy. I don't understand. Nobody hasn't once come and apologized for what happened."

Acting Fresno Deputy Police Chief Dennis Bridges said they officers were responding to a 911 call, but the store had provided little information.

"The officers were going into it with limited information," Bridges said. "It would be like how they would respond if a robbery alarm button was pushed and when they called the business back, they didn't get an answer. They could assume they didn't answer because they were being robbed."

Johnson said the situation reminded him of stories of black people having the police called on them for no reason.

"I was just watching videos about that stuff the other day. To be in the same situation myself, it just scared  me," Johnson said. "Every time I think about it I get teary-eyed. It was the day before my 3-year-old daughter's birthday."

The T-Mobile employee referred questions to the company's corporate office, which did not respond to a request for comment.