WATCH: Kellyanne Conway twists herself in knots trying to blame the NFL for White House snub of Eagles 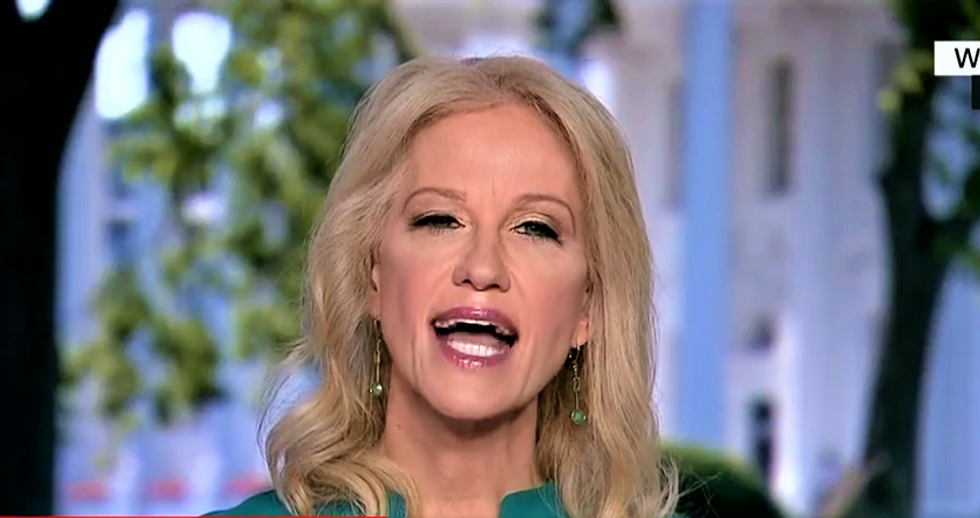 Trump adviser Kellyanne Conway is a diehard Philadelphia Eagles fan, which put her in an awkward position when she was asked about President Donald Trump's decision to uninvite the Super Bowl-winning team to the White House this week.

When asked by CNN's John Berman about the controversy, Conway tried to shift blame to the NFL for Trump's own decision to cancel the event, as she said that the NFL's decision to require players on the field to stand for the national anthem had upset many Philadelphia players.

"The NFL came out with its own policy," she said. "If you read the NFL policy -- and I have, I've practically memorized it -- that is a condition of employment they're making on their players and their clubs. That has nothing to do with the White House and the president."

This is patently false, as NFL owners have admitted that they enacted their new policy on the national anthem in direct response to Trump's angry tirades against their league. Additionally, Conway does not explain why so many Eagles players specifically would be upset by the NFL's policy, as none of them actually took a knee for the anthem during the season.

CNN's John Berman pointed out that perhaps some Eagles players were still upset after the president had called kneeling players "sons of b*tches" during a campaign rally. Conway seemed to dismiss this argument by saying that it happened "last year" and wasn't a recent outburst.

Conway then again blamed the NFL's new policy -- which Trump has championed -- for the Eagles not wanting to show up.

"There obviously are some hurt feelings over the new policy," she said.