WATCH: Raging white man threatens to deport Latino over fender bender that may not have even happened 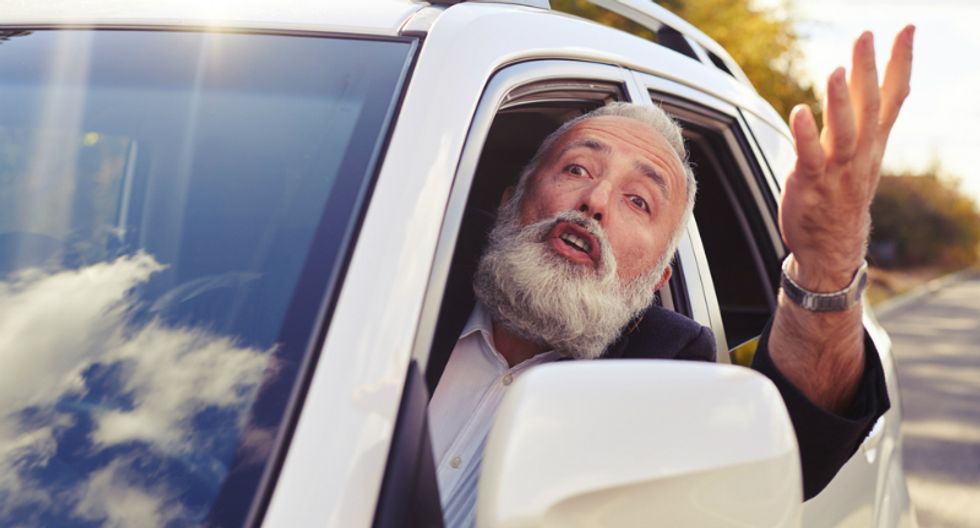 An angry older white man leans out of a car. Image via Shutterstock.

In a now-viral video, a white Californian is heard telling a Latino truck driver that he should be deported after a potential fender bender outside of a Barnes & Noble bookstore.

The video, released by Fresno's FOX26 news station shows an unnamed white man speaking on his phone shortly after the alleged accident with a Latino shipping truck driver at a North Fresno shopping center. The driver's daughter, Nicole Gonzalez, told the station that after the incident (which has not yet been corroborated by FOX26), the white man had already begun insulting her dad when he decided to pull his phone out and start recording.

"I ought to ship your f*cking ass back home where ever you're from," the white man says to the Latino man filming.

"You're a f*cking beaner, motherf*cker," the man is heard telling the person recording, who he then calls a "stupid f*cking Mexican."

When the man filming asks the other man if he's racist, he replied that he's "racist against you" before continuing to hurl expletives.

"Even if an accident did occur," Gonzalez told FOX26, "that doesn't give him the right to talk to someone like that."

You can watch the aftermath of the alleged fender bender and the white man's racist tirade below: