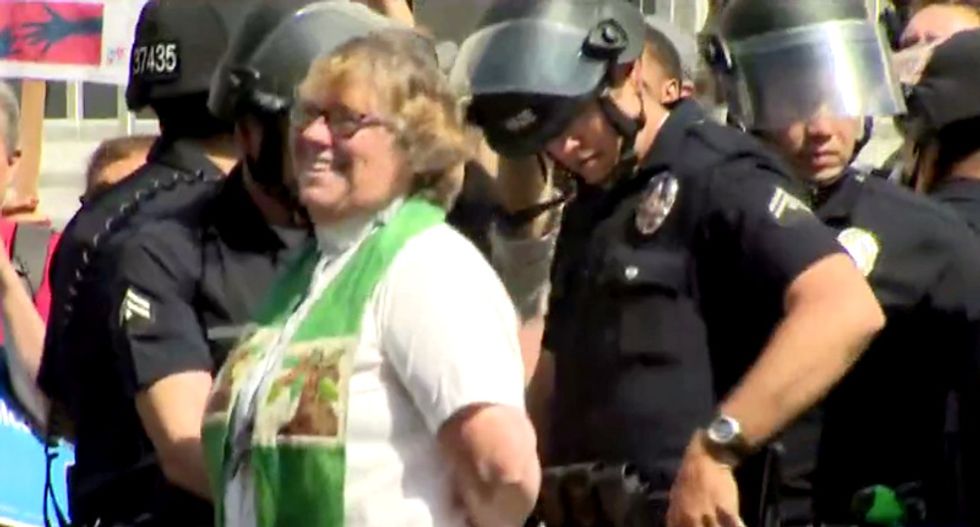 On Tuesday, President Donald Trump lobbied lawmakers for funding to build a wall on the Southwest border.

"I will always be defending the sovereignty and safety of American people," Trump said in a press conference. "We want funding of the wall that we very much need."

Meanwhile, Attorney General Jeff Sessions was greeted by protestors in downtown Los Angeles, who blocked the street to take a stand against the forced separation of families.

One woman, a Methodist minister, refused to budge. Police handcuffed her and led he away, to cheers from the crowd—she was the first of many protestors who risked arrest to make a point. "They're trying to make a statement. They are upset about the separation of families at the border. They don't think it's moral. They think it's inhuman," KTLA reported.

A rabbi interviewed by the station explained why they were risking arrest.

"I think the message is ... as people of faith, our job is to teach love and justice and compassion," the rabbi said.

"There are moments that require a deeper risk," she told KTLA.

Asked what she thought about Jeff Sessions and others using religion to justify their zero tolerance policy on migration, the rabbi made her position clear.

"I think that's why you see so many people of faith speaking out right now, of all backgrounds. When you use scripture ... you can use scripture to justice unfortunately really atrocious acts," she said.

Yet, even in the Old Testament,  the main take away is to help the needy.

"The commandment to care for the stranger, the orphan. It's 36 times!" the rabbi said.