Woman at Trump rally sobs because critics hate his child camps: 'He tries so hard and people are so down on him' 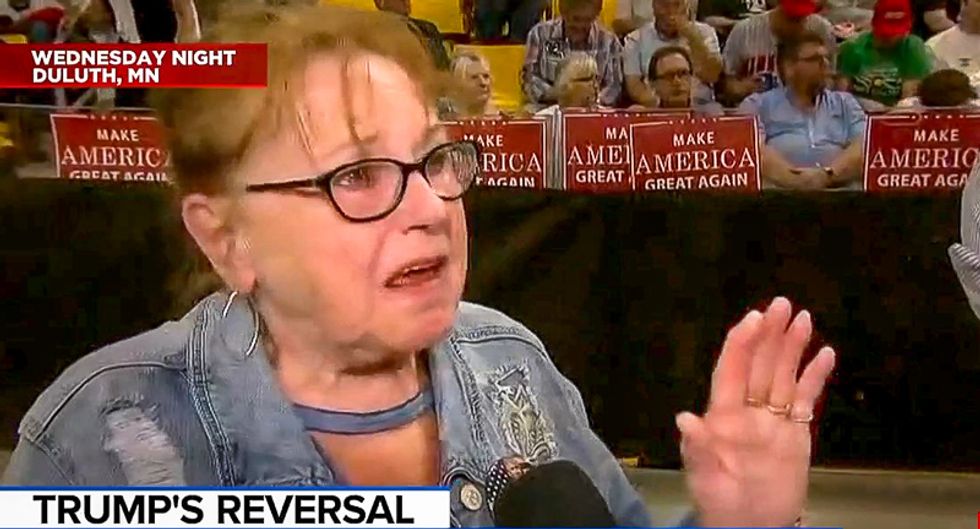 A supporter of President Donald Trump broke down in tears on Wednesday because she said that critics have unfairly condemned the president over his decision to place immigrant children in camps.

After Trump signed an executive order to overturn his policy of separating parents and children, supporters at his Wednesday rally in Duluth, Minnesota defended the president.

One woman sobbed over the criticism that Trump has received.

"I see you getting emotional," an MSNBC reporter told the woman. "Why is that?"

"Because -- I just -- he just," the woman said, struggling through her tears. "He just tries so hard and so many people are so down on him."

One man who supports Trump pretended to cry to mock liberals who oppose the family separation policy.

"Won't someone please care for the children?" he asked sarcastically. "Well, if I get arrested, my kids aren't going to see me for a while either."

"When a person goes, robs a bank, he's separated from his family anyways," the man opined. "The same as the people coming into this country. I'm an immigrant myself. I came here in 2000 and when we emigrated, we came here legally."