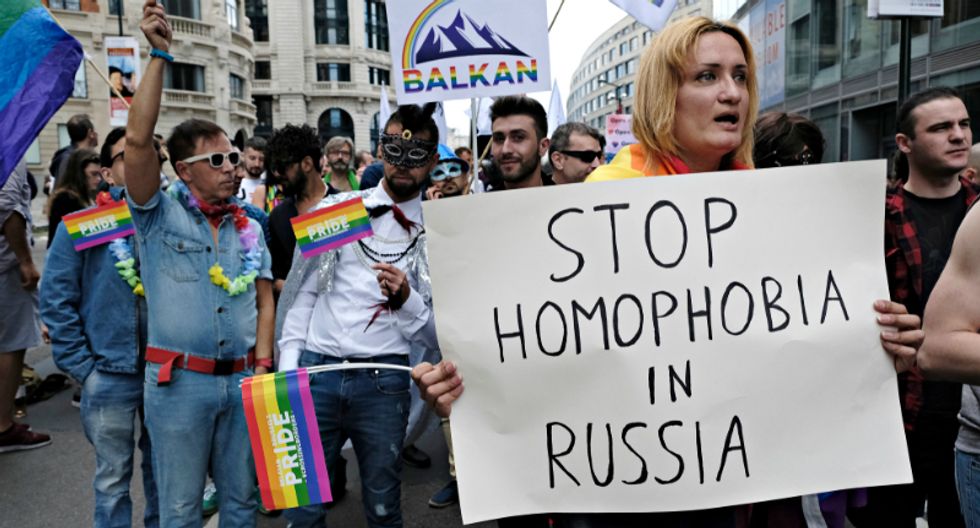 Participants march during the Belgian Gay Pride parade in Brussels Belgium on May 20, 2017. Image by Alexandros Michailidis via Shutterstock.

After traveling through multiple countries to get to the United States and avoid persecution, a bisexual Russian man waited in immigration detainment for months — only to be denied asylum by an Oregon judge.

The Portland Mercury reported that after being threatened by police in the Russian North Caucasus region, near the border of the notoriously anti-gay Chechnya, Dmitri (a pseudonym to protect his identity) decided to flee to the US in spite of knowing neither English nor any people in the states.

"Most asylum seekers fly to the United States on a tourist visa and then, once they arrive, request asylum," reporter Katie Herzog wrote. "But Dmitri had applied for a tourist visa four times before, and each time his application was rejected."

Instead, Dmitri "took the long way," flying from Moscow to France, Cuba and finally Tijuana, Mexico, where he surrendered himself to authorities who detained him. In the past, most asylum-seekers were granted a bond hearing every six months, but in February, Herzog noted, the Supreme Court reversed the decision that gave that entitlement. Asylum-seekers can now be held indefinitely while awaiting hearings, "even if they haven’t committed a crime."

"The implications of this policy are playing out most visibly on the southern border" with Donald Trump's family separation policy. In Dmitri's case, however, it led to him being sent to the Northwest Detention Center in Tacoma, Washington — a place he'd never heard of prior to surrendering to agents at Tijuana.

Herzog noted that although only 37 percent of immigrants nationwide have attorneys due to their cases taking place in civil (rather than criminal) court, Dmitri got lucky and found a lawyer "through fellow detainees at the prison." He spent five months at the Northwest Detention Center before his hearing, where Portland-based Judge Richard Zanfardino teleconferenced in to preside over his case.

In most cases, the report noted, queer and transgender Russians are able to get asylum in the US because judges "understand that being LGBTQ could get you murdered in Russia." Zanfardino, however, did not agree with that general consensus and argued that it's not illegal to engage in homosexual activity in Russia.

Russian law, the judge wrote in his decision, "does not criminalize an individual for being homosexual but instead criminalizes speech considered pro-LGBTI" — leaving out that it is illegal to be out of the closet in the country. Herzog wrote that Zanfardino also denied the claim because Dmitri "also denied the claim because Dmitri had secretly dated men in the past without suffering physical harm."

Kimahli Powell, the director of the Rainbow Road organization that helps queer and trans people get to safety around the world, said Zanfardino is "is basically condemning [Dmitri] to violence" with the ruling.

The bisexual Russian's lawyer plans to appeal the claim, a process that could take between six months to a year. When and if that appeal is denied (which is likely, Herzog wrote), the attorney will then take the case to federal court.

In the meantime, Dmitri will remain in a prison where he said he is very cold, playing cards and learning English.