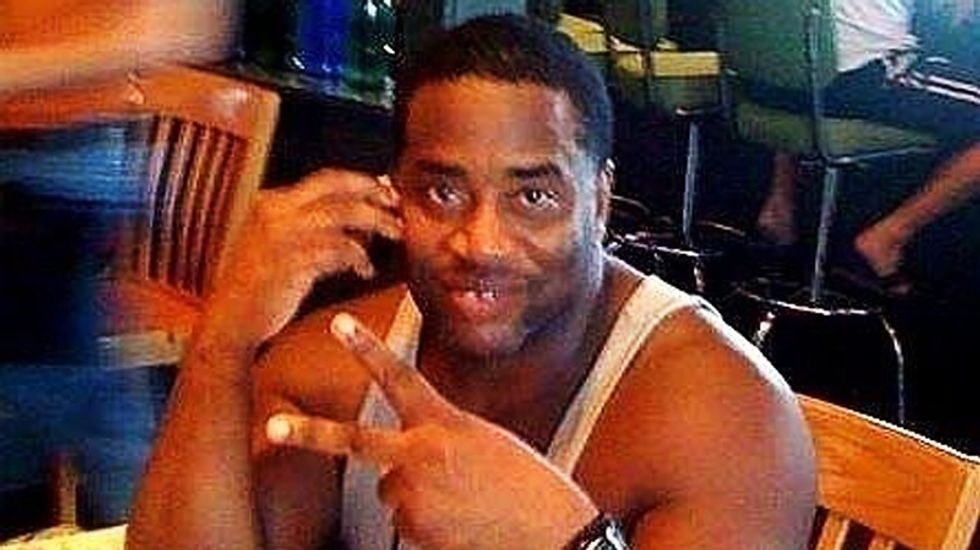 After four years in jail, Marvin Louis Guy—the Kileen, Texas man who is facing capital murder charges for killing a narcotics officer during a no-knock drug raid in 2014—has yet to go to trial. But it isn’t because Guy’s main attorney, Carlos Garcia, hasn’t been trying to pin down a trial date. Last week on July 19—when Guy, Garcia and the prosecution met with Judge John Gauntt in a courtroom in Bell County, Texas for a status hearing—Garcia stressed that he was ready to go to trial.

“We’re ready,” Garcia told Judge Gauntt. “We’ve been ready. We’re ready to go. Give us a date.” But no trial date was set, although another status hearing has been set for Thursday, August 9.

Guy is facing one count of capital murder and three counts of attempted murder for an incident that occurred on the morning of May 9, 2014, when he shot and killed narcotics officer Charles Dinwiddie. The prosecutors in the case include Bell County District Attorney Henry Garza and Bell County Assistant District Attorney Fred Burns, who are seeking the death penalty. And to those who believe that Guy never should have been arrested in the first place—including journalist Radley Balko—the case epitomizes everything that is wrong with the War on Drugs.

Guy doesn’t deny that he shot and killed Dinwiddie, but his version of the events differs wildly from how the prosecution sees it. When a SWAT team raided Guy’s home in Kileen at around 5:30 a.m., they were operating on a tip from an informant who had claimed that he was selling bags of cocaine. Guy, who grabbed his gun and opened fire during the no-knock raid, has asserted that he had no idea the men invading his home were law enforcement officers—he thought he was being robbed. And the evidence strongly suggests that Guy did, in fact, believe he was acting in self-defense.

No bags of cocaine were found in Guy’s home. Nor were any other drugs—not even marijuana. The only thing officers found was a glass pipe and a grinder, which indicates that Guy was, at worst, a recreational drug user and not a drug dealer. And that’s exactly how Balko sees it.

After Guy’s arrest, Balko—who has been a vehement critic of the War on Drugs and wrote the 2013 book “Rise of the Warrior Cop: The Militarization of America’s Police Forces”—asserted that between his arrest and the May 9, 2014 SWAT raid, Guy was getting a very raw deal.

In a May 16, 2014 article for the Washington Post, Balko asserted, “The fact that the police didn’t find any drugs in the house suggests that Marvin Louis Guy didn’t know he was shooting at cops. Drug dealer or no, unless he had a death wish, it’s unlikely that a guy would knowingly fire at police officers when he had nothing in the house that was particularly incriminating.”

A similar incident took place in Burleson County, Texas on December 19, 2013, but with a very different outcome in court. That day, a SWAT team carried out a no-knock raid on the home of Henry Magee after an informant claimed that he had a large marijuana-growing operation. Magee shot and killed one of the officers, Adam Sowders—and like Guy, Magee asserted that he thought he was being robbed, had no idea he was shooting at law enforcement officers and believed he was acting in self-defense.

Magee was facing the possibility of capital murder charges, but a grand jury decided that he legitimately believed he was acting in self-defense—and Magee was not indicted. The Magee case, in fact, was mentioned in 2014 in a Change.org petition asking prosecutors to “please drop the capital murder and attempted murder charges against Marvin Louis Guy.” The petition pointed out that Guy thought he “was defending his wife and home, just as Magee believed he was doing.”

There is an important difference between the Magee and Guy cases, however: Magee is white, while Guy is African-American. And given the long history of abuses that people of color have suffered with Texas’ judicial system, it’s hard not to notice that in two very similar cases, the white man walked free while the African-American man has spent four years in jail awaiting trial and still might end up on Texas’ death row.

Guy and Magee are hardly the only Americans who have faced the possibility of prison or the death penalty after shooting narcotics officers during militarized no-knock drug raids. There have been many others, from Ryan Frederick in Virginia to Christina Korbe in Pennsylvania to Cory Maye in Mississippi. Frederick, Korbe and Maye all maintained that they believed they were acting in self-defense, but that didn’t keep them out of prison.

Korbe was sentenced to 16 years in prison after pleading guilty to voluntary manslaughter and weapons charges—a plea bargain she decided was preferable to the life-without-parole sentence prosecutors originally wanted—while Frederick received a ten-year sentence for voluntary manslaughter. Balko believes Frederick’s sentence was totally unjust; in a March 18, 2008 article for Reason, he commented, “Ryan Frederick is merely the latest citizen to be put in the impossible position of being awakened from sleep, then having to determine in a matter of seconds if the men breaking into his home are police or criminal intruders.”

Maye—who, like Guy, is African-American—actually went to Death Row because of an incident that occurred in Prentiss, Mississippi around 11 p.m. on December 26, 2001, when narcotics officers targeted two sides of a duplex for a no-knock drug raid. Maye lived on one side of the duplex, while his neighbor, Jamie Smith, lived on the other side; Smith was the one suspected of selling large amounts of marijuana, but both sides of the duplex were raided—and Maye, believing he was being robbed, fired three shots.

Officer Ron W. Jones was shot and killed, and even though no drugs were found on Maye’s side of the duplex, Maye was convicted of first-degree murder by a predominantly white jury and sentenced to death by lethal injection. But in 2010, the Mississippi Supreme Court decided that Maye was entitled to a new trial; Maye pled guilty to manslaughter, was given a new sentence of ten years in prison with time already served, and released from prison on July 18, 2011.

But Maye never should have been prosecuted in the first place—nor should Korbe or Frederick have been. All of them were railroaded just as Texas prosecutors are still trying to railroad Guy now. And when it comes to militarized no-knock drug raids, there is an appalling double standard at work: narcotics officers who kill, injure or maim innocent people are seldom prosecuted when they screw up, but anyone who shoots an officer during those raids is likely to face murder or manslaughter charges.

When it comes to the War on Drugs, police often act with impunity, while the burden of proof is firmly on those they harm. The examples of narcotics officers screwing up and raiding the wrong home are numerous, and journalist Abby Martin (formerly of RT America and now hosting “The Empire Files”) put it perfectly when she asserted that the War on Drugs operates in a “two-tiered justice system that shelters police from accountability time and again.”

Take, for example, the 2014 case in which a SWAT team in Habersham County, Georgia conducted a botched drug raid on the home of Alecia Phonesavanh and severely insured her toddler, Bounkham “Bou Bou” Phonesavanh, by setting off a flash-bang grenade. No drugs were found in the home, the person they were looking for wasn’t even living there, and the grenade blew a hole in the toddler’s face and chest. But despite all that, a grand jury decided not to charge any of the officers.

Narcotics officers who recklessly throw a grenade in a toddler’s crime are given every benefit of the doubt, while Guy must fight a long, had battle to avoid death by lethal injection.

It remains to be seen how soon Guy, who was never granted bail, will go to trial. But even if all charges against him were dropped today, he has already, in effect, served a four-year sentence. And like so many Americans caught up in the War on Drugs, Marvin Louis Guy knows all too well what it means to be guilty until proven innocent.