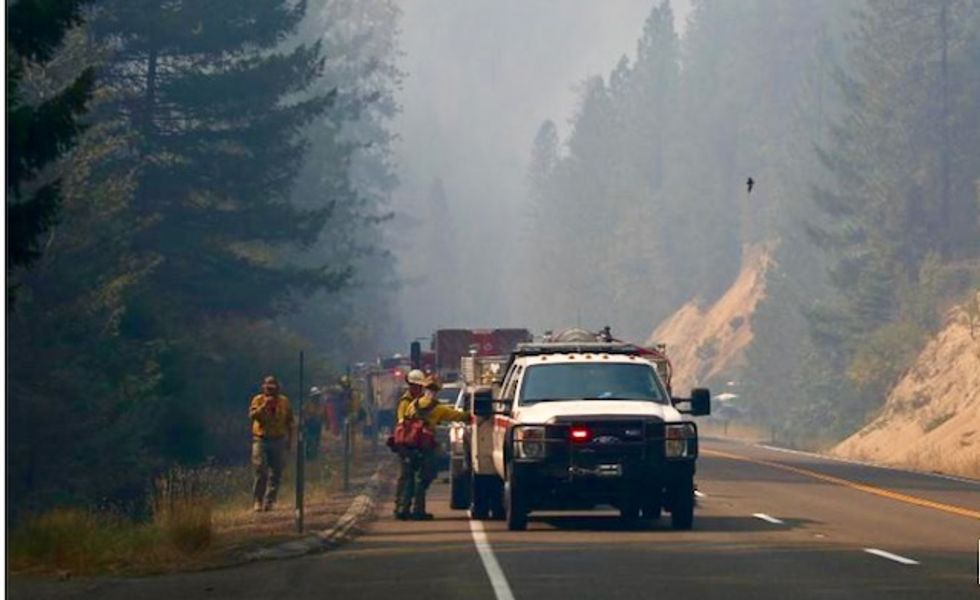 Jul 30, 2018; Redding, CA, USA; Firefighters monitor fire movement as it crosses Highway 299 just west of Buckhorn Summit near the Trinity County line. Firefighters made progress on the fire which is now at 20 percent containment. Kelly Jordan via USA TODAY NETWORK

Some 36,000 firefighters struggling against one of the most destructive wildfires in California’s history hoped calmer winds on Tuesday would allow them to make more progress in carving out buffers to contain the blaze.

Six people have been confirmed killed and seven others have been missing since last Thursday. More than 800 homes and 300 other buildings have been reduced to ash and 37,000 people forced to evacuate as the Carr fire consumed 104,000 acres (42,000 hectares) in and around the town of Redding.

The firefighters reported some progress on Monday, having carved buffer lines around 23 percent of the fire’s perimeter, up from just 5 percent during much of the past week, thanks to calmer winds expected to remain in the area for two days.

The blaze, so far the seventh most destructive in Californian history, roared without warning into Redding and adjacent communities last week after being whipped by gale-force winds into a firestorm that jumped the Sacramento River.

It is the biggest of 17 wildfires now raging across the state, fueled by drought-parched vegetation, triple-digit temperatures and unpredictable winds.

Two firefighters and at least four civilians were killed, including two young children and their great-grandmother who perished while huddled under a wet blanket.

Whole neighborhoods, including the town of Keswick on the outskirts of Redding, were laid to waste as residents fled for their lives in a chaotic evacuation. On Monday authorities began allowing some to return home, though an estimated 37,000 people still remained under mandatory evacuation orders.

To the southwest, the River and Ranch wildfires, known as the 23,000-acre Mendocino Complex, has forced thousands to evacuate as it has threatened 10,000 homes. About 2,000 firefighters are battling the blazes about 150 miles (240 km)north of San Francisco, where it has destroyed seven homes since it began on Friday, fire officials said.

Collectively, wildfires that have burned mostly in the U.S. West have scorched 4.6 million acres so far this year, 24 percent more than the average of burned landscape tallied for the same period over the past decade, according to federal data.

Authorities in California have reported levels of fire intensity and unpredictability they have seldom seen before. Statewide, wildfires have charred nearly 410,000 acres since January, the highest year-to-date total for the end of July in a decade, according to CalFire.