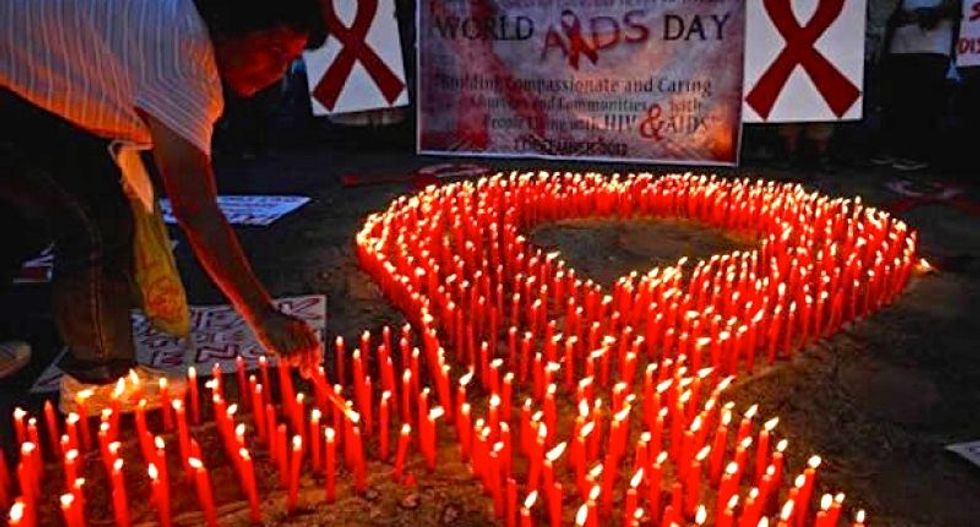 An AIDS activist lights candles placed in the shape of a red ribbon on World Aids Day in Manila on December 1, 2012 (AFP)

A world AIDS assembly opens in Amsterdam on Monday hoping to harness the star power of activists Elton John and Prince Harry to bolster the battle against an epidemic experts warn may yet spiral out of control.

Thousands of delegates -- researchers, campaigners, activists and people living with the killer virus -- will attend the 22nd International AIDS Conference amid warnings that "dangerous complacency" may cause an unstoppable resurgence.

In recent days, experts have alerted that new HIV infections, while down overall, have surged in some parts of the world as global attention has waned and funding has levelled off.

And they lamented that too sharp a focus on virus-suppressing treatment may have diverted attention from basic prevention programmes such as condom distribution, with the result that the AIDS-causing virus is still spreading easily among vulnerable groups.

"The encouraging reductions in new HIV infections that occurred for about a decade has emboldened some to declare that we are within reach of ending AIDS," Peter Piot, virus researcher and founder of the UNAIDS agency, said last week.

However, "there is absolutely no evidence to support this conclusion," he insisted, and warned: "The language on ending AIDS has bred a dangerous complacency."

A UNAIDS report warned of a long and difficult road ahead even as it reported a drop in new infections and AIDS deaths, and a record number of people on life-saving antiretroviral therapy (ART).

These hard-fought gains could be reversed, experts said Sunday as the finishing touches were put on the venue that will host some 15,000 delegates -- also including celebrities Charlize Theron and Conchita -- for five days.

An alarming rate of new infections coupled with an exploding young population in hard-hit countries could spell "a crisis of epic proportions," said Mark Dybul, a veteran American AIDS researcher and diplomat.

"Bad things will happen if we don't have more money," he told a pre-conference, saying the world was "probably at the highest risk ever of losing control of this epidemic."

Dybul and colleagues said donor and domestic funding has dropped significantly and would likely continue to decline, from about 20.6 billion euros ($24.1 billion) last year -- most of it financed from the domestic budgets of nations with the heaviest AIDS burden.

According to UNAIDS, the funding gap is almost $7 billion per year.

Under Donald Trump, the US administration has proposed massive spending cuts, though these have so far failed to pass through Congress.

The United States is by far the biggest funder of the global AIDS response.

The immune system-attacking HIV virus has infected nearly 80 million people since the early 1980s. More than 35 million have died.

Today, data show the infection rate is rising in about 50 countries, and has more than doubled in eastern Europe and central Asia.

Experts regret that the focus on prevention has faded.

Last year's 1.8 million new infections showed that "unless we did something completely drastic, we will not get anywhere near" the target of no more than 500,000 in 2020, said Nduku Kilonzo of Kenya's National AIDS Control Council.

"We have a crisis and it is a prevention crisis," she said.

At high risk are sex workers, gay men and people who inject drugs -- many of whom are forced onto society's fringes by repressive laws in their countries.

At the conference, NGOs will launch a liberalisation campaign titled: "Just say no to the war on drugs," a direct challenge to the 1980s Reagan administration's "Just say no" message at the height of America's "war on drugs".

The programme's criminalisation of drug use has compounded the stigma and discrimination experienced by users.