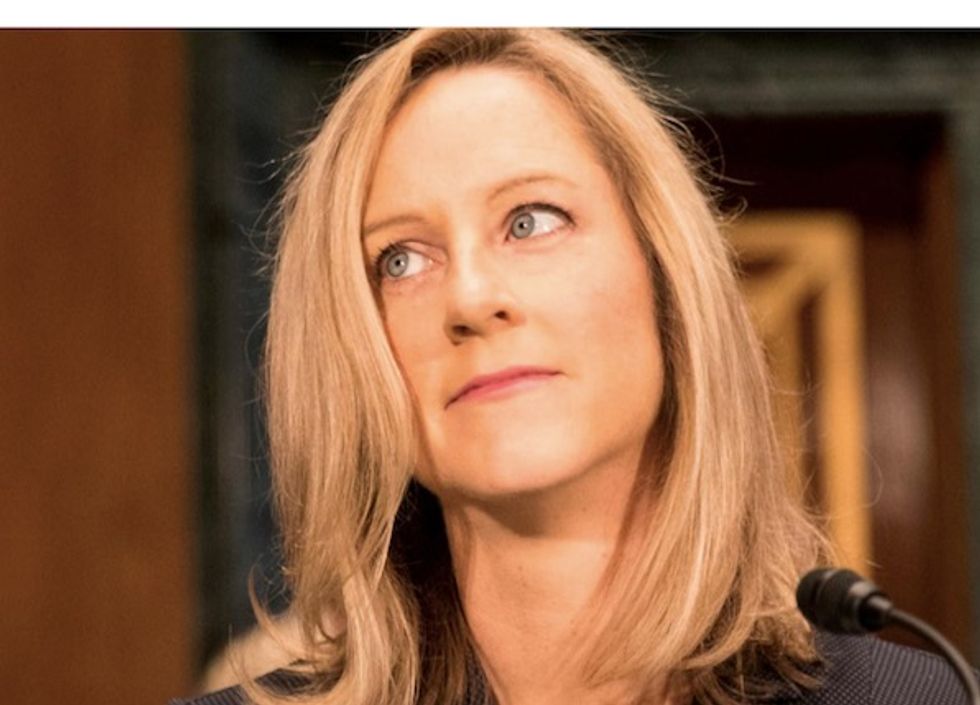 FILE PHOTO: Kathleen Laura Kraninger testifies before a Senate Banking Committee hearing on her nomination to be director of the Consumer Financial Protection Bureau on Capitol Hill in Washington, U.S., July 19, 2018. REUTERS/Alex Wroblewski

Democratic lawmakers stepped up pressure on President Trump’s pick to lead the Consumer Financial Protection Bureau, demanding more information on her role in the administration’s immigration policies and her stance on consumer finance issues, according to letters seen by Reuters on Friday.

The requests for information filed with the Senate Banking Committee on Tuesday by Senators Elizabeth Warren, Sherrod Brown, Catherine Cortez Masto and Robert Menendez could delay Kathy Kraninger’s confirmation as CFPB chief if it emerges she had a bigger role in the Trump administration’s “zero-tolerance” policy on immigration than she revealed during her confirmation hearing last week.

Kraninger, a senior official at the Office of Management and Budget (OMB), fended off repeated attacks by Senate Democrats regarding her role in the policy that separated more than 2,000 children from their parents.

She told Congress she had no role in setting or developing that policy but that she had attended meetings relating to its implementation.

“You dodged questions about your involvement in the administration’s policy to separate children from their parents at the [Mexico-U.S.] border, refusing to answer or using passive language to avoid describing your personal role,” the senators wrote.

They demanded Kraninger further clarify the exact nature of her role, including a list of those meetings and who else attended. Under the confirmation process, Kraninger must provide a written response for the Congressional Record by July 31, a spokeswoman for the committee told Reuters on Friday.

Brown and Warren previously wrote to Kraninger in June to press her on the immigration issue but received no response.

In Tuesday’s letters, the senators also probed Kraninger, who runs the financial regulation file at OMB, to clarify her position on an extensive range of consumer finance and enforcement issues.

The CFPB was created after the 2007-2009 financial crisis to protect consumers from predatory lenders.

Republicans say the agency has overstepped its legal statute and are hoping Kraninger, who would take over from interim chief Mick Mulvaney, will continue to rein it in. Democrats and consumer advocates hope to defend it from being further weakened.

Kraninger and the OMB did not respond to requests for comment on Friday. The White House has previously said her extensive management experience in government makes her well-qualified for the role.

On Wednesday, two Washington-based consumer advocacy groups filed a lawsuit seeking details about Kraninger’s work at OMB, including travel, pay and expenses she had incurred.