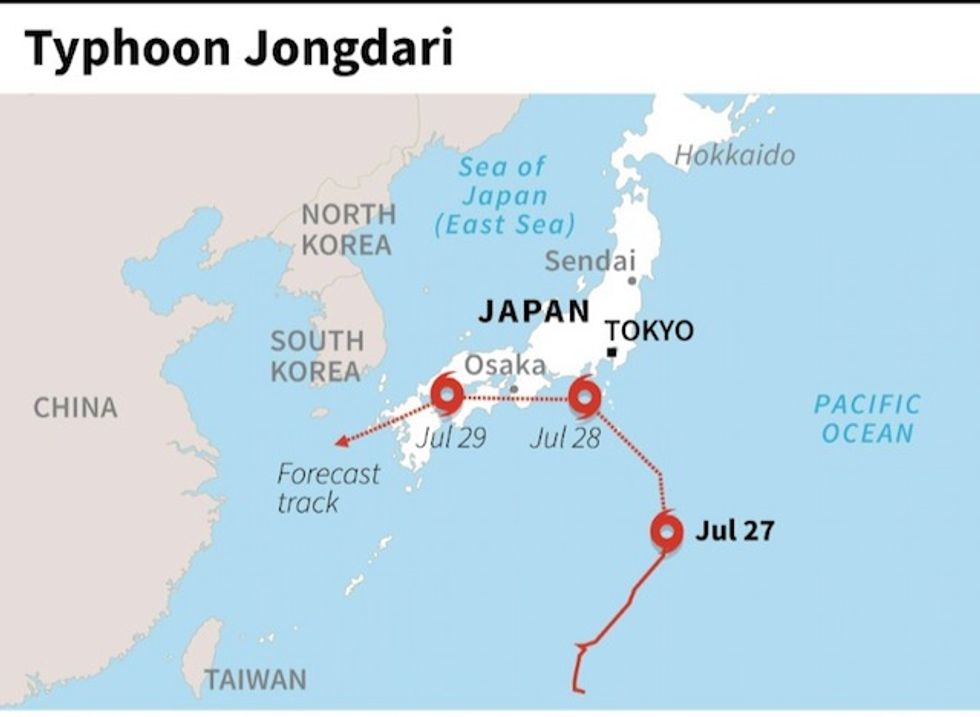 A powerful typhoon hurtled towards Japan on Saturday, prompting local authorities to issue early evacuation orders, with western areas recently devastated by floods and landslides in the storm's crosshairs.

Typhoon Jongdari, packing winds of up to 180 kilometres (110 miles) an hour, is forecast to make landfall on the country's main island on Saturday night or early Sunday, according to Japan's Meteorological Agency.

TV footage showed high waves smashing onto rocks and seawalls on the coastline in Shimoda, southwest of Tokyo, and trees buffeted by strong winds and heavy rain.

The storm, currently some 200 kilometres south of Tokyo, is expected to barrel towards the western Chugoku region Sunday, where record rainfall earlier this month unleashed flooding and landslides, killing around 220 people and leaving more than 4,000 survivors still living in temporary shelters.

The western city of Shobara in Hiroshima prefecture issued an evacuation order to some 36,400 residents as a precautionary measure, officials said.

"Although it has not rained here, we are urging people to evacuate before it gets dark," Masaharu Kataoka, a city official, told AFP.

More evacuation orders and advisories were issued in western Japan, including Kure in Hiroshima prefecture, where some 6,380 residents were urged to evacuate, news reports said.

In Japan, evacuation orders are not mandatory and people often remain at home, and are later trapped by rapidly rising water or sudden landslides.

"It's going to deal a double punch," a resident in Okayama told public broadcaster NHK, referring to the recent killer downpours and the incoming typhoon.

"We are seriously worried," he said.

More than 410 domestic flights have been cancelled so far because of Typhoon Jongdari, while ferry services connecting Tokyo with nearby islands were also cancelled due to high waves, news reports said.

The flooding in the Chugoku region was Japan's worst weather-related disaster in decades, and many residents of affected areas are still living in shelters or damaged homes.

"We are fully ready 24 hours a day to evacuate residents," Tadahiko Mizushima, an official of Okayama prefecture in Chugoku, told AFP.

"We are paying special attention to the areas where restoration of river banks is under way as it would be the first heavy rain since the disaster."

Officials are particularly cautious after the deadly downpours because many people did not heed evacuation orders and became trapped. Some critics said the orders were issued too late.

"We are afraid that people may not be able to evacuate due to strong wind or floods blocking evacuation routes," Hiroshima governor Hidehiko Yuzaki told reporters.

"I would like people to evacuate in advance so that they can save their lives," Yuzaki said.

Japan is now in typhoon season, and is regularly struck by major storm systems during the summer and autumn.