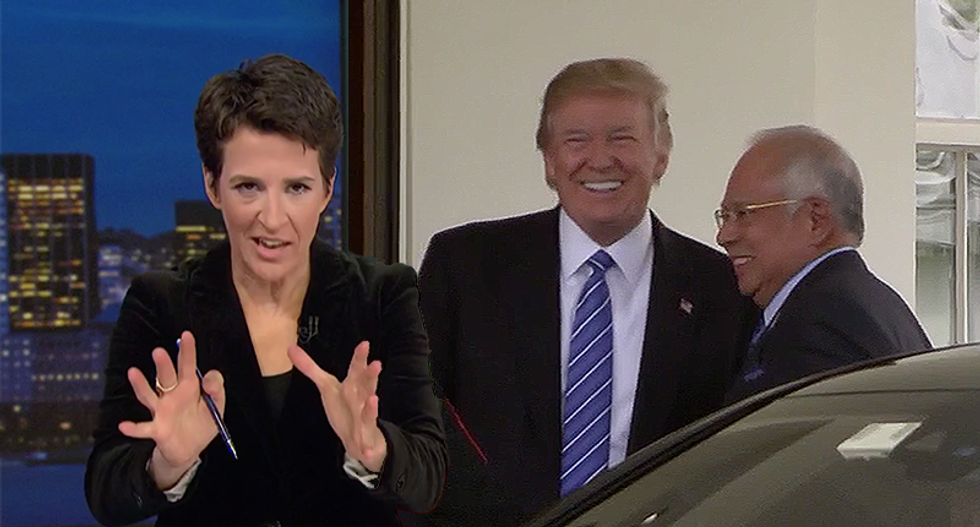 Former Malaysia Prime Minster Najib Razak was arraigned tonight (Wednesday in Malaysia) on theft and corruption of what is estimated at billions in items and foreign cash. MSNBC's Rachel Maddow explained that a scandal half way around the world might not seem important, except that this man was once referred to by President Donald Trump as "my favorite prime minister."

"The U.S. Justice Department is one of the legal authorities that has been pursuing that crime that apparently did not at all trouble President Trump, who invited the Malaysian prime minister to the White House just a few months ago despite that active U.S. Justice Department investigation accusing him of stealing hundreds of millions of dollars" from the United States, Maddow explained.

Trump was so fond of the prime minister that at one point he gave the newly arraigned man a photo inscribed with the comment, "to my favorite prime minster."

"You should also know there's another Trump Republican Party connection here that is live and still unexplained," Maddow continued. "This Malaysia thing, this is the gigantic theft and corruption case for which Elliott Broidy, until recently, the deputy finance chairman of the National Republican Party."

The case against Broidy was that he reportedly "offered the Malaysians a contract in which he and his wife would be paid $75 million for making the Justice Department investigation into this matter go away. They could just pay them in handbags."

She noted that it is unclear why this major Trump donor and RNC finance deputy chair would have the power to make a Justice Department investigation go away. Broidy's business partner, however, has been given immunity in the case and he's also a witness in special counsel Robert Mueller's investigation.

"So, I have a feeling in the end we will eventually find out," Maddow closed.