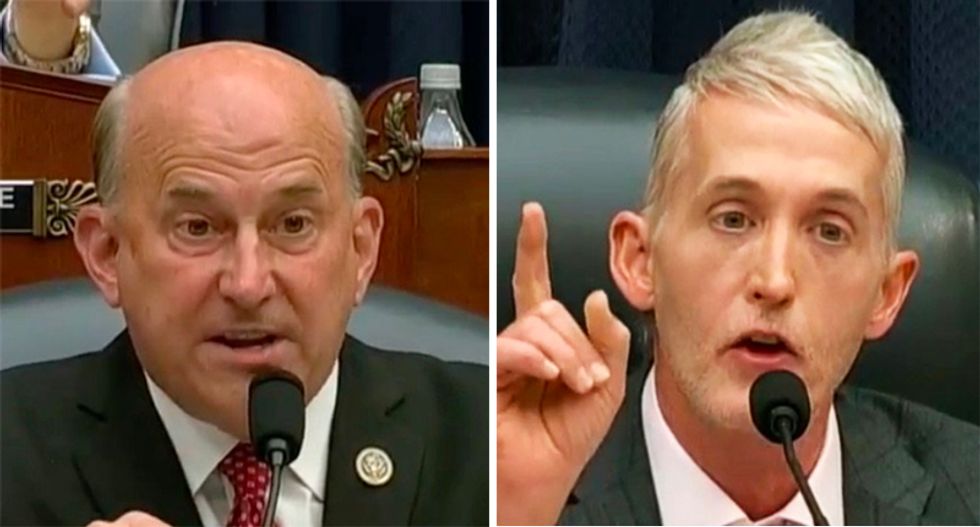 House Republicans' long-awaited chance to grill an FBI agent who has become a right-wing boogeyman in their efforts to support President Donald Trump's baseless claims of a deep state conspiracy against his presidency was quickly revealed to be a partisan sideshow on Thursday.

Peter Strzok is the FBI agent who was removed from a probe investigating potential collusion between Trump and his campaign staffers and the Russian government after it was revealed that he and his mistress had exchanged text messages that criticized the future president, as well as other politicians. On Thursday he testified before the House Oversight and Judiciary Committees.

While Republicans tried hard to shame him, and by extension discredit the FBI investigation into the president, Strzok fought back with fiery expressions of righteous indignation.

"At no time in any of these texts did those personal beliefs ever enter into the realm of any action I took. The suggestion that I'm in some dark chamber somewhere in the FBI would somehow cast aside all of these procedures, all of these safeguards, and somehow be able to do this is astounding to me — it simply couldn't happen," Strzok told his congressional inquisitors on Thursday, according to CNN.

This was a perfectly logical thing to say: It has never been assumed that FBI agents would not have political opinions, or would never share those opinions with other people. Indeed, the congressional Republicans blasting Strzok now weren't vocal or outraged when reports came out shortly before the 2016 presidential election indicating that a number of FBI agents had a pro-Trump, or at least anti-Clinton, bias. The key has always been that FBI agents should not allow their political opinions to influence their work — and for all of the wild accusations made about Strzok and Lisa Page, his lover, none have even come close to proving that their conversations were anything more than expressions of their own individual views.

Trey Gowdy, the chairman of the House Oversight Committee, chose not to see things that way on Thursday.

"The moment special counsel Bob Mueller found out about Peter Strzok's text and emails he kicked him off of the investigation," Gowdy declared. "But that was a year and a half too late. The text and emails may have been discovered in May of 2017, but the bias existed and was manifest a year and a half before that. All the way back to late 2015 and early 2016. So it wasn't the discovery of texts that got him fired, it was the bias manifest in those texts that made him unfit to objectively and dispassionately investigate."

Nor did the partisan grandstanding stop with Gowdy's statement. It reached its nadir when Bob Goodlatte, chairman of the House Judiciary Committee, threatened to hold Strzok in contempt for not answering a question about the number of witnesses questioned during the early days of the Trump-Russia probe. Even though Strzok pointed out that he had been advised by the FBI's legal counsel to not answer questions about ongoing investigations, Goodlatte continued to press the FBI agent, prompting loud objections from Democrats like Rep. Jerry Nadler, the ranking member of the Judiciary Committee.

When Strzok asked if he could speak with the FBI general counsel, he was told that he could only speak with his own counsel.

This isn't to say that Gowdy was done with his own posturing after that incident. When Strzok objected to Gowdy misrepresenting observations that had been previously stated during the hearing about why Mueller removed Strzok from the investigations — with Strzok reiterating that it was not because he was biased but rather because Mueller didn't want the perception of bias to exist because of his texts — Gowdy used blue language to shoot Strzok down.

"I don't give a damn what you appreciate Agent Strzok. I don't appreciate having an FBI agent with an unprecedented level of animus working on two major investigations during 2016," Gowdy told Strzok.

This investigation is a political charade — a platform to elevate far-right conspiracy theories and undermine the special counsel's ongoing criminal investigation of the President and his campaign aides.

I understand we are living in a political era in which insults and insinuation often drown out honesty and integrity. I have the utmost respect for Congress’s oversight role, but I truly believe that today’s hearing is just another victory notch in Putin’s belt and another milestone in our enemies’ campaign to tear America apart.

That is precisely it.

It is inconceivable that the Republicans controlling Congress would be grilling Strzok about his personal text messages if they weren't pertaining to an investigation about President Trump. Indeed, even if he had exchanged personal text messages that were insulting about a completely different, non-political figure who happened to be in some way connected to an ongoing investigation, it is dubious to say the least that these congressional Republicans would care.

The reason they are "outraged" now — and the reason Strzok and Page are being vilified by right-wing media — is because the Republican Party appears terrified that the investigations will uncover something damning about Trump. Already a wealth of evidence exists that circumstantially suggests the president has been compromised by Russia, and much of it strongly suggests that collusion between his campaign and the Russian government occurred (remember that June 2016 Trump Tower meeting?)

If Mueller concludes his investigation by saying that Trump did nothing wrong, the same Republicans trying to discredit him now will instantly forget about Strzok and Page and all of the other conspiracy theories they've cooked up, and will embrace Mueller's investigation as total vindication. Because they have reason to believe that Mueller will not come back empty-handed, however, they feel the need to turn people against the investigator in order to save him and, presumably, themselves.

Hence the travesty of the Strzok hearing today, and why his righteous indignation was both appreciated and appropriate.