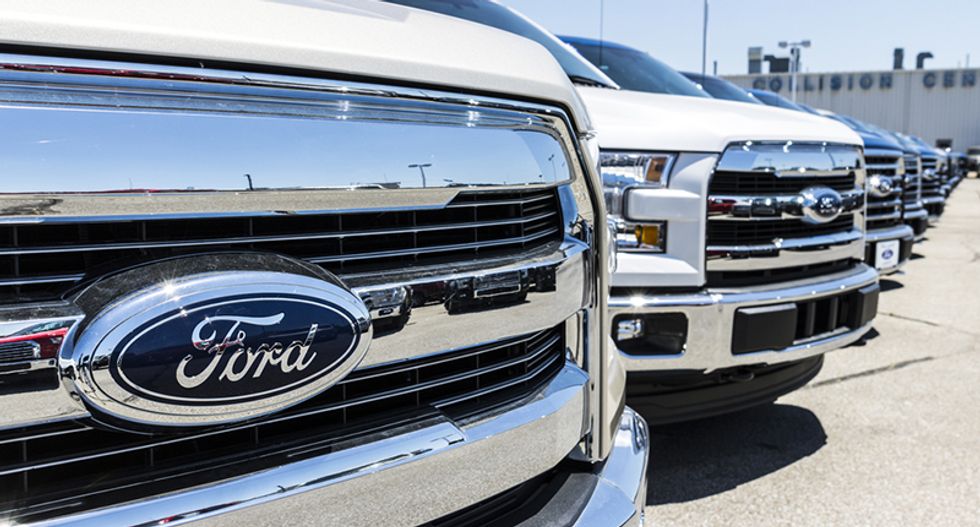 Ford Motor Co (F.N) on Wednesday lowered its full-year earnings forecast due to slumping sales and trade tariffs in China and its struggling business in Europe, and said ongoing plans to revamp its business could lead to pre-tax charges of up to $11 billion over the next three to five years.

Ford, the No. 2 U.S. automaker, also postponed a meeting with investors that was scheduled for September. The company said it would be rescheduled when “more specifics can be shared on global redesign and restructuring.”

Shanks said Ford would improve the performance of underperforming units or dispose of them.

Chief Executive Officer Jim Hackett, asked directly by an analyst whether he would still be leading Ford when the company reschedules its investor day, responded, “Hell yes, I expect to be.”

Ford reported its second-quarter net profit fell by almost half, missing analyst expectations, due to a fire at a parts supplier that disrupted production of its popular pickup trucks, while falling sales and tariffs hurt the automaker’s business in China.

The automaker’s struggles to boost sales in China have showed no sign of ending despite its taking steps to bring new products to market. Through the first five months of 2018, Ford’s Chinese sales were down 22 percent.

Ford said earlier this month that for now it will not hike prices of imported Ford and higher-margin luxury Lincoln models in China, thus absorbing the additional cost of tariffs on U.S.-made vehicles.

Ford reported a second-quarter pre-tax loss of $483 million for its China operations.

Ford’s declining sales, lower pricing and lower sales in the hot crossover and SUV market have created “a whole snowballing effect” in China, Shanks said. “It’s going to take us a while to get out of that issue.”

Shanks said he sees improvement in China next year, but he did not provide a financial outlook for the region.

Ford’s president of global markets, Jim Farley, said the company will not see a “real boost” in China until it begins rolling out new sport utility vehicles in 2019 and 2020.

Ford said it was working to cut costs in its European unit, while trying to focus on profitable models. Shanks said the region required a major redesign that was already under way, though Farley said the company will report a loss there this year.

Shanks also said Ford’s South American operations have not earned an appropriate return on investment since 2004, and said the company was focused on a “significant redesign.”

Virtually all of Ford’s quarterly profit came from sales of high-margin pickup trucks like the F-150 and SUVs in North America. The automaker has become increasingly reliant on the F-150 to drive results.

In May, Ford said its quarterly profits would be hurt by shutdowns at three U.S. truck plants caused by a fire at a key parts supplier.

On Wednesday Ford lowered its full-year adjusted earnings outlook to a range of $1.30 to $1.50 per share, from a previous forecast of $1.45 to $1.70 a share. Analysts have predicted full-year earnings per share of $1.52.

Former President Donald Trump this week recorded a video for a fundraiser on behalf of the people who are currently serving jail sentences for violently rioting on his behalf.

The Washington Post reports that Trump this week sent a recorded message to a fundraising event for the Patriot Freedom Project, which bills itself as "a non-profit organization providing legal, financial, mental-health, and spiritual support for individuals and their families — including young children — who are suffering at the hands of a weaponized justice system."