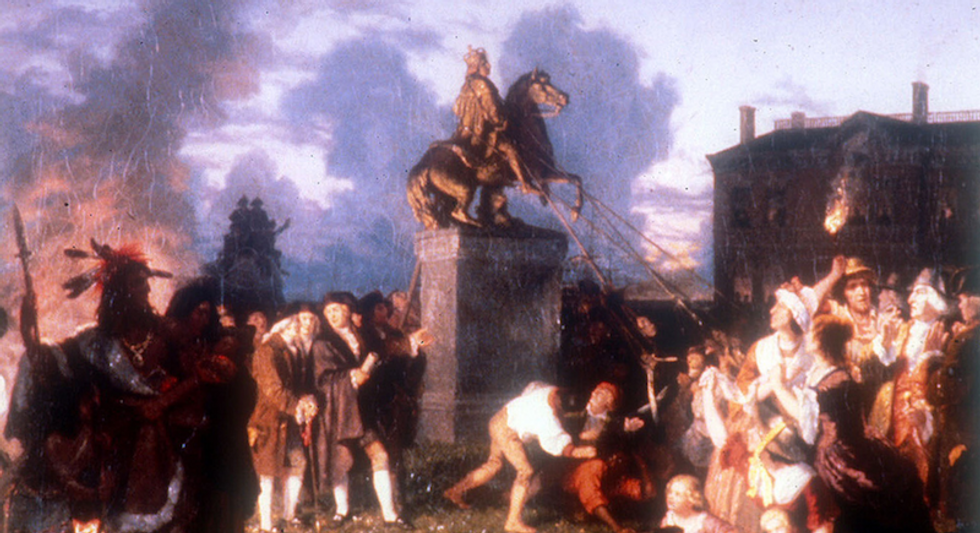 Every year, on the Fourth of July, NPR has a tradition of reading the Declaration of Independence on July 4. It's a fun little tradition, and one few people thought much about.

Last year, conservative snowflakes were triggered when NPR tweeted out the Declaration of Independence.

Failing to recognize the words of our nation's sacred foundational document, they reacted with rage, believing that the condemnation of a tyrannical leader was meant as an insult to Donald Trump.

The line that really angered people referred to King George's poor temperament: "A Prince, whose character is thus marked by every act which may define a Tyrant, is unfit to be the ruler of a free people."

No one called Trump an ill-tempered tyrant—Trump's supporters just assumed he was being called one, for whatever reason.

The Declaration of Independence, which we celebrate as our nation's birthday, is full of lines that will trigger Trumpistas. Here are four.

The Declaration of independence is radically pro-immigration and the United States was established as a country with open borders.

In 2018, with Trump locking up asylum-seeking migrants and separating young children from their parents, one section of the document stands out more than normal.

One of the chief grievances listed is King George III's anti-immigration policies. George was charged by the colonists with trying to hurt the growth of the colonies by "obstructing the Laws for Naturalization of Foreigners [and] refusing to pass others to encourage their migrations hither."

Yes, the United States that our founding father's envisioned had fully open borders.

It was nearly a century before the United States established up any law restricting immigration—only in 1875 did Republicans enact a racist immigration law called the Page Act.

The Declaration of Independence is radially pro-free trade.

The men who signed the Declaration of Independence strongly opposed tariffs and trade wars, rebelling against the King "for cutting off our Trade with all parts of the world."

You can imagine them weeping today, upon seeing a man who seized the presidency starting a trade war for no reason.

The Declaration convinced people to riot in the streets and rip down historic statues.

Before independence, many American cities had statues of the King of England or other British elites.

But when the document was publicly read in cities like New York, people reacted by rioting and ripping down statues of the King.

They didn't worry that these historic statues had educational and cultural value, nor did they think they ought to be preserved lest we forget our own history.

They tore down the statues, believing they were symbols of an oppressive government.

From the very birth of the United States, our nation has valued the destruction of symbols of our oppression even in a riot.

The Declaration of Independence is anti-military.

It's common to hear the Fourth of July treated as yet another day dedicated to American soldiers.

But the people who signed the document were rabidly opposed to standing armies and unnecessary military excursions. Several of the grievances address the King's army, and none of them threaten to raise a colonial army or praise the troops.

The King was charged with "transporting large Armies of foreign Mercenaries to compleat the works of death, desolation, and tyranny, already begun with circumstances of Cruelty & Perfidy scarcely paralleled in the most barbarous ages, and totally unworthy the Head of a civilized nation."

What would they think of America today?