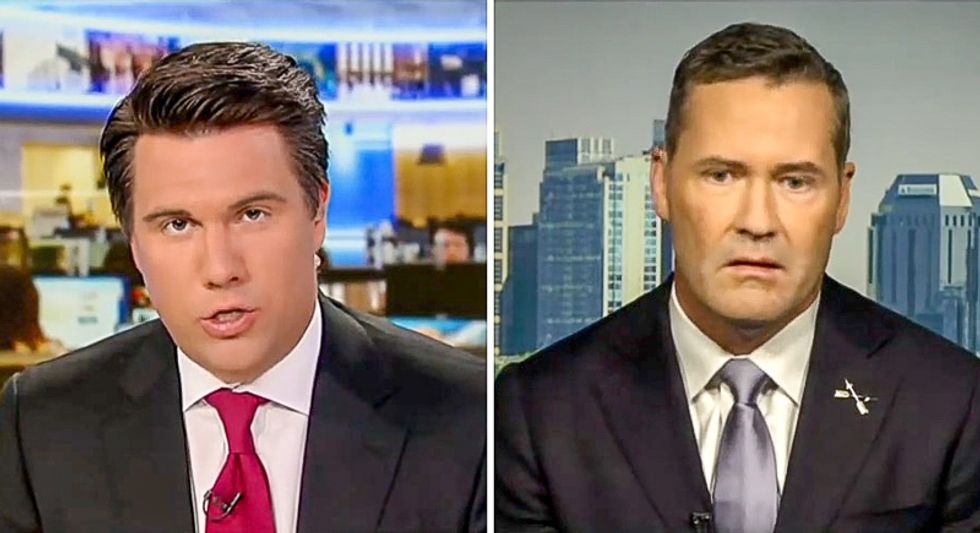 Fox News guest host Leland Vittert on Thursday angered President Donald Trump's supporters by pointing out that the president had not "gotten anything in return" for the "big gift" he gave to North Korea by meeting with dictator Kim Jong-un.

During an interview on Fox News, Florida Republican congressional candidate Michael Waltz argued that the Trump administration's policy of a "credible" use of military force would prompt North Korea to give up nuclear weapons.

"How do you have a credible use of military force when you've ended exercises, you're allowing China to cheat on the sanctions and the North Koreans have not done anything to show their good faith," Vittert interrupted.

Waltz argued that only one military readiness exercise had been suspended to appease North Korea.

"Come on," the Fox News host interrupted again. "You can't deny that was a big gift to the North Koreans and we haven't really gotten anything in return."

"When you listen to the president's rhetoric and he says that we're having great conversations and everything's wonderful and we would be at war if it wasn't for me," Vittert said. "That doesn't really sound like, 'I'm keeping my boot on your neck.' He has tougher words about Trudeau and Canada than he does about Kim Jong-un."

"Yeah but, Leland, we have to look at what we're actually doing vs. the rhetoric," Waltz insisted. "The president is clearly trying to establish relationships so that we can move a process forward. And I'm okay with that."

"@LelandVitter you showed just showed what a TRUMP HATING BIASED 'NEWS READER' you are with the TOTAL MISREPRESENTING of the Trump actions with N Korea in interview with Michael Waltz," one viewer wrote. "Giving up one military EXERCISE is not a big deal in the BIGGER PICTURE."

Why is Leland Vitter, an idiot Trump Hater, still on Fox? His style of talk is so annoying and his hatred for Trump… https://t.co/2jRIEglTGh
— Howard Rosenstein (@Howard Rosenstein)1530805063.0

Fox News so-called-journalist Leland is such a negative media person on Fox and constantly interrupts the guest and… https://t.co/0FyUwH5hfC
— Sandra Nuckles (@Sandra Nuckles)1530805002.0