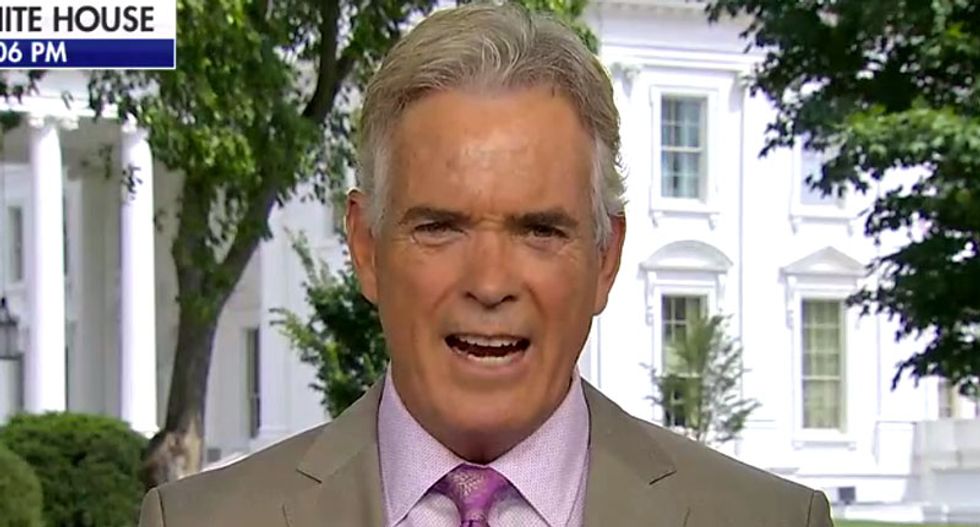 President Donald Trump on Thursday once again attacked the news media as the "real enemy of the people" even as he touted his own "relationship" with Russian President Vladimir Putin.

Fox News reporter John Roberts called out the president for his rhetoric against the press -- and he pointed out that many media reports were simply quoting Republican lawmakers who were angry that he refused earlier this week to say he trusted his own intelligence agencies more than Russian President Vladimir Putin.

"President Trump doubles down on his 'fake news media - enemy of the people' mantra for reporting that his meeting with Putin was widely panned by members of his own party," Roberts wrote on Twitter. "That makes me an enemy of the state."

President Trump doubles down on his “fake news media - enemy of the people” mantra for reporting that his meeting w… https://t.co/lJv8ETFPHL
— John Roberts (@John Roberts)1532006955.0

Fox News fans who follow Roberts on Twitter were not sympathetic to his arguments, however, and attacked him for being a "fake news" reporter despite the fact that he works for Trump's favorite cable news network.

@johnrobertsFox Are you fake news John? Cause that’s who is is referring to
— Jennifer Burke (@Jennifer Burke)1532007565.0

@johnrobertsFox The fake news media is the enemy of the people - none of their followers getting the truth - distru… https://t.co/XyzRvPtZGw
— Karen (not Karen) (@Karen (not Karen))1532009744.0

@johnrobertsFox Members of his own party was shamed by media into following media's narrative. Media were so blind… https://t.co/MuPgCc7s68
— EKorthals (@EKorthals)1532008108.0