Homophobia, misogyny and Islamophobia: How the right’s new darling is tossing red meat hatred to Trump's base 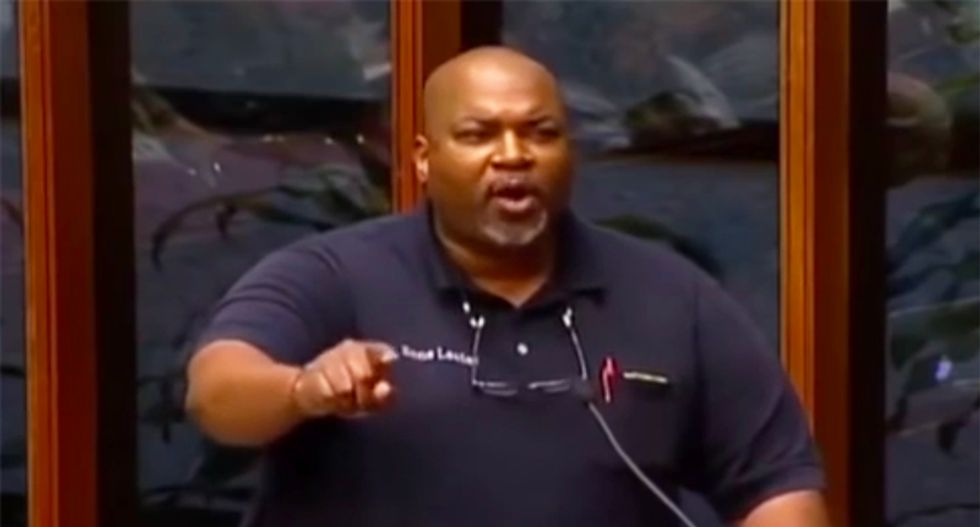 This Saturday, pro-gun control MAGA hordes will gather at the Orange County Second Amendment (OC2A) rally in Hillsborough, North Carolina. Among the speakers will be the newest darling of the right—recently granted fawning coverage by outlets such as Breitbart, Twitchy, Tucker Carlson’s The Daily Caller and Glenn Beck’s The Blaze—Mark Keith Robinson. The right’s latest attack dog epitomizes the current Republican brand, as a “birther pundit who says gay people are ‘devil-worshipping child molesters,’ black Democrats are ‘slaves,’ the student survivors of the Parkland shooting are ‘silly little immature media prosti-tots,’ and Michelle Obama is a man.”

As Shareblue Media notes, Robinson became a favorite among alt-right and right-wing media back in April after delivering a pro-gun speech at a town council meeting in Greensboro, North Carolina. But he’s also incredibly vocal on social media. In a Facebook post dated February 7, Robinson wrote that homosexuality has been “pushed...over the top” and hysterically concludes “PEDOPHILLA is next, which will be closely followed by the END of civilization as we know it.”

There is nothing more beloved by the GOP than a token visible minority who’s eager to promote the party’s racist views. Robinson, who is African-American, frequently promotes the ahistorical GOP view that the party remains that of Abraham Lincoln, and tacitly accuses black people of being too stupid to understand their own political interests. “Half of black Democrats don't realize they are slaves and don't know who their masters are,” Robinson posted on Facebook in February, employing a corruption of a totally fake Harriet Tubman quote. “The other half don't care.” (“Nor do all of them vote. Yet always the first to complain,” wrote a fan of Robinson’s in the comments.)

In March, Robinson posted a meme that declares President Barack Obama “entered the White House with a fake birth certificate.” And in yet another example of his misunderstanding of how slavery worked, Robinson recently compared Senator Maxine Waters, an African-American woman, to 19th-century “PRO SLAVERY Democrat Preston Brooks,” and labeled her an “OVERSEER.” Following his lead, fans of Robinson filled the comments with overtly racist and misogynoir responses, including memes that paint Sen. Waters as a “crack addict” and imagine her speaking in clumsy, misspelled, inarticulate phrases.

Just this Friday, Robinson took to Facebook to call Hillary Clinton a “witch,” a word he apparently thinks works for pretty much any woman he doesn’t like, considering he used the same term in 2016 to describe Beyonce. Shareblue points out that Robinson “uses the male pronoun to refer to Michelle Obama, echoing a conservative theory that she is male.”

Robinson has also disparaged Muslims via his social media. In one deleted post (saved in this screenshot), he declared, “The question is not ‘When is the last time you saw anyone but a Muslim holding a severed head and smiling’....The question is, when is the last time you saw a Muslim protesting against a Muslim who severed a head, or bombed a shopping mall, or ran down a group of humans with a truck, or shot up a nightclub, or burned someone alive.....”

Despite—or rather, because of—Robinson’s remarks, he’s become a highly sought-after speaker on the right. There are appearances this summer in Broward County, Florida; Tallahassee, Florida; and Milwaukee, Wisconsin, among many others. This month, Robinson shares a bill with Candace Owens, the black conservative provocateur who wrote that Trump “isn’t just the leader of the free world, but the savior of it as well.” During his April appearance on Fox & Friends, co-host Ainsley Earhardt gushed, “You’re great; I really think you should run for office.”

This article was produced byMake It Right, a project of the Independent Media Institute.

LONDON/DUBLIN (Reuters) -British Prime Minister Boris Johnson said on Monday parliament could pass legislation this year to scrap some of the rules on post-Brexit trade with Northern Ireland, pressing on with plans that have angered the European Union. The Northern Ireland Protocol Bill, which would unilaterally overturn part of a Brexit divorce deal agreed in 2020 if it becomes law, was debated in parliament for the first time on Monday. Irish Foreign Minister Simon Coveney expressed disappointment that Britain was still pushing ahead with the bill saying "this is not the way to find sustaina...