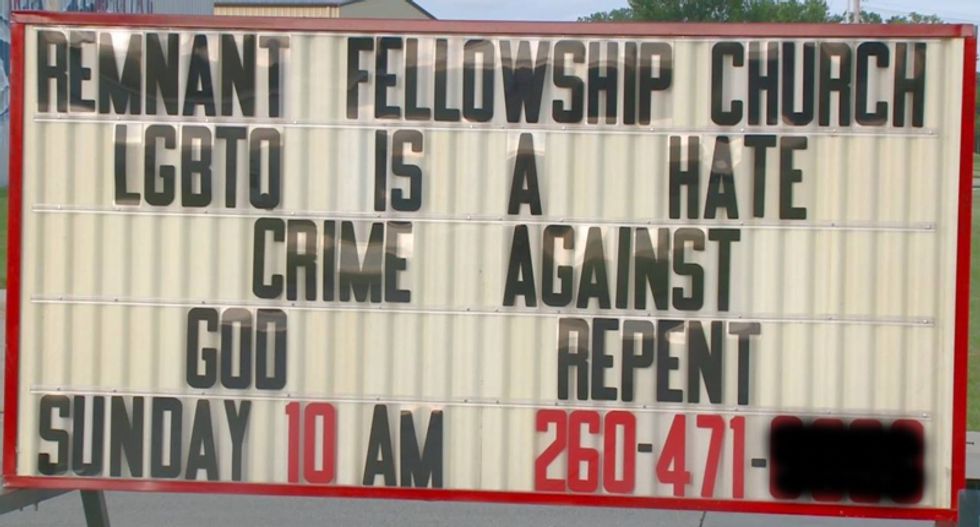 Sign in front of the Remnant Fellowship Church in Auburn, Indiana.

The Remnant Fellowship Church in Auburn, Indiana was forced out of their building after an offensive church sign, WTA-21 reported Saturday.

On Wednesday, June 27, Remnant Fellowship Church in Auburn posted a sign reading, "LGBTQ is a hate crime against God. Repent."

Since then, the church was protested, evicted, and shut down their Facebook feed.

"It's been evicted," a church represented told Raw Story. "Looking for another building."

One critic even modified the sign, taking down the church's message and replacing it with "stay open minded."

"Seeing such a hateful message I just didn't think that that was OK for a community of children and teens who might be going through some troubles with their own sexualities and a larger community that stands behind the LGBTQ+ and I just personally felt that it needed to be something more accepting and more loving," she explained. "I just think it's important that we embody those values of empathy and compassion and love and basic human rights to care about other people."

The church had remained defiant following the protested, the Christian Post reported.

"Put this on church sign to reach a wicked and filthy generation. I pray God grant some repentance and life before the great Judgements about to be poured on this nation. Especially the young people who have been sold lies so long and are [fed] a flood of filth every day," the church said in a statement. "Jesus can save the vilest of sinners, many of us were saved out of wicked lives. Nothing is to[o] hard for God."

"Do not be deceived: Neither the sexually immoral nor idolaters nor adulterers nor men who have sex with men nor thieves nor the greedy nor drunkards nor slanderers nor swindlers will inherit the Kingdom of God," the statement continued. "And that is what some of you were. But you were washed, you were sanctified, you were justified in the name of the Lord Jesus Christ and by the Spirit of our God."