Maxine Waters slays Trump with most devastating rant yet: 'We'll find out about his schemes, his lying, his payoffs' 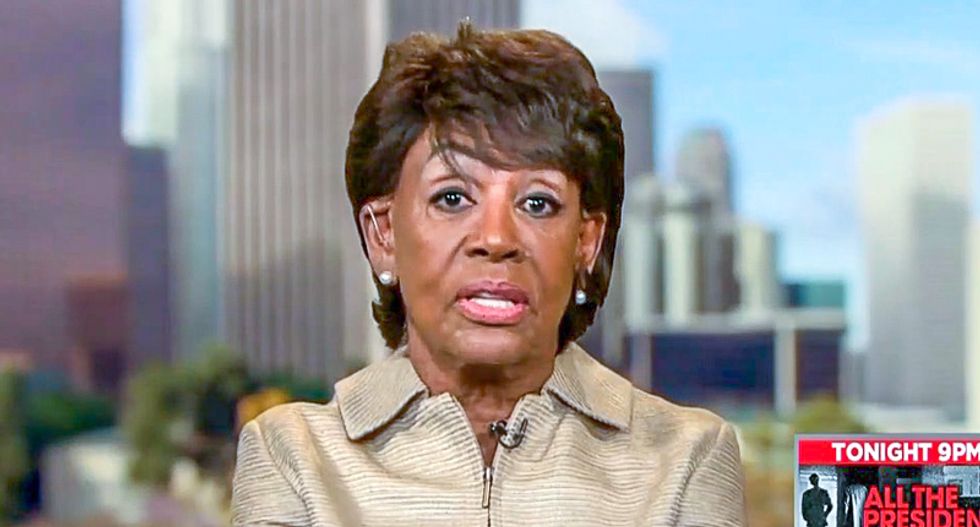 Rep. Maxine Waters (D-CA) vowed on Sunday that all of President Donald Trump's secrets would be exposed before he left office

During an interview on MSNBC, host David Gura asked Waters to respond to Trump's threat to shut down the government if he does not get funding to build a border wall.

Waters noted that Trump has taken credit for positive economic numbers, but she said that the president is weighed down by his other scandals.

"There is so much going on with this president and his allies and with Giuliani and all of this," she explained. "With the judge having decided that they can go forward with the emoluments claim with what is happening on the border."

"When you couple that with the fact that his son has lied, he has lied about that meeting that took place at the tower, at the Trump Tower, all of that is going to help, you know, obscure the message that he is trying to bring on the economy," Waters said. "This president is wreaking havoc on this country. And so while there is some improvement in the economy, we have all of this other mess that we have to take a look at and what is, you know, in the forefront of what is being talked about in the media."

The California Democrat argued that Trump's economic message would not be enough to overcome his disapproval ratings.

"Let him go out there," Waters remarked. "As a matter of fact, I don't think that that's going to be so powerful that people can overlook how he's dividing this country, how he is upsetting our democracy, how he is aligned with Putin, how he is in bed with the Kremlin. It's all about money making and it's all about Putin wanting to lift these sanctions and all of his allies wanting to make money out of this Russia deal."

"I think he's going to have to answer some real questions about the fact that he lied -- that he knew that the meeting [at Trump Tower] was going to take place. All of the planning that had to go into that meeting by his son [Donald Trump Jr.]. And the fact that he talks with his daddy every day."

Waters went on to accuse the president's attorney, Rudy Giuliani, of lying about whether Trump knew that former Playboy model Karen McDougal was paid off to be silent about an alleged affair. Tapes seized from former Trump attorney Michael Cohen seem to indicate that Trump was aware of the McDougal hush money.

"I certainly believe that I that Giuliani is lying," she said. "When he says that they have already determined that the tape has been tampered with, he cannot prove that. If he is called on [to testify] right now, he has no way of justifying that lie."

"They can lie all they want to. It's all going to come out in the wash. I am convinced that in the final analysis they are not going to be able to be successful with the kind of lying that they are doing. It is obvious," Waters added. "I hope that the other tapes that are in possession of Mr. Cohen will be revealed and we'll find out more about this president, his schemes, his lying, his payoffs, all of that because I certainly believe that the president of the United States is not only divisive and dangerous, but he does not need to be in that office."

Waters concluded with a warning that Trump should be concerned about Democrats taking back the House of Representatives.

"Look out, President, you're in trouble," she said.