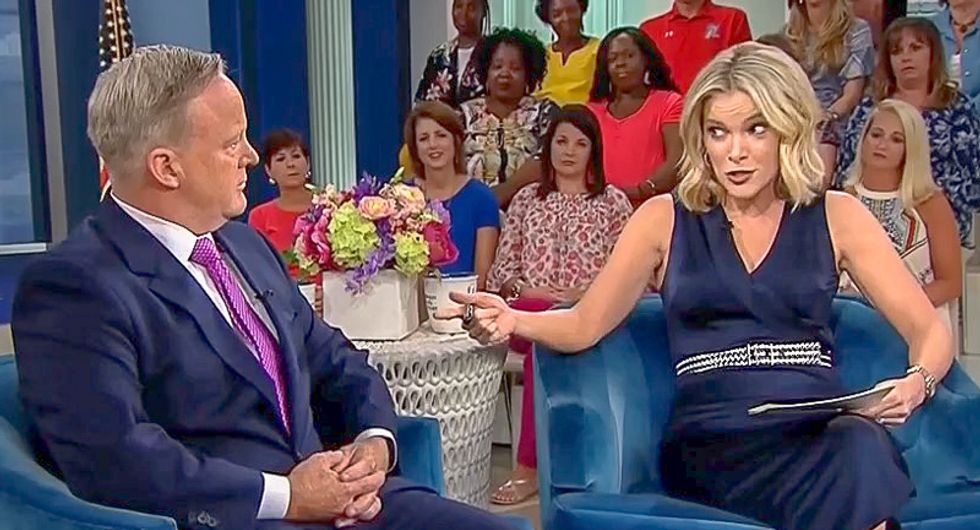 During an interview to promote Spicer's new book, Kelly asked the former press secretary if he acknowledged that his claims about the size of Trump's inauguration were lies.

Spicer tried to deny that he had made a false statement, but Kelly interrupted.

"What I said was the totality of the people that watched it online and everywhere [was larger than any other inauguration]," Spicer argued.

"You said, ever -- in person!" Kelly exclaimed.

"In person or around the globe!" Spicer shot back.

"So you're still standing by it?" the NBC host pressed.

"No," Spicer admitted as the audience laughed. "I'm saying that I could have done that a heck of a lot better. But the point was that what we were conflating with the number of people stating one position vs. what I was trying to do -- and admittedly not well."

"And not truthfully," Kelly pointed out.

"No!" Spicer gasped. "The number of people that watched it live on Twitter -- hold on -- that was the highest rated live Twitter that ever occurred. The website traffic was through the roof."

"I screwed that day up," Spicer lamented.

"What you said there wasn't true and your boss said the same thing," Kelly remarked. "[Trump is] the one that told you to go out there. You're very defensive of him on this point. You know as well as I do that President Trump is the one who wanted the inauguration crowd size restated."

"I'm taking responsibility for my actions," Spicer said in defense of Trump. "I went out there, I said those words. I could have done a better job."

For two more segments, Kelly continued to grill Spicer and accused him of "dodging" questions.

"Why can't you just admit that he struggles with the truth," Kelly said of Trump.

"I think he sells his policies and his achievements and his results," Spicer stuttered. "That's who he is."

"This isn't selling," Kelly insisted. "These are non-truths, to be charitable."

"That's not hyperbole!" Kelly shouted. "Those are not truthful statements."