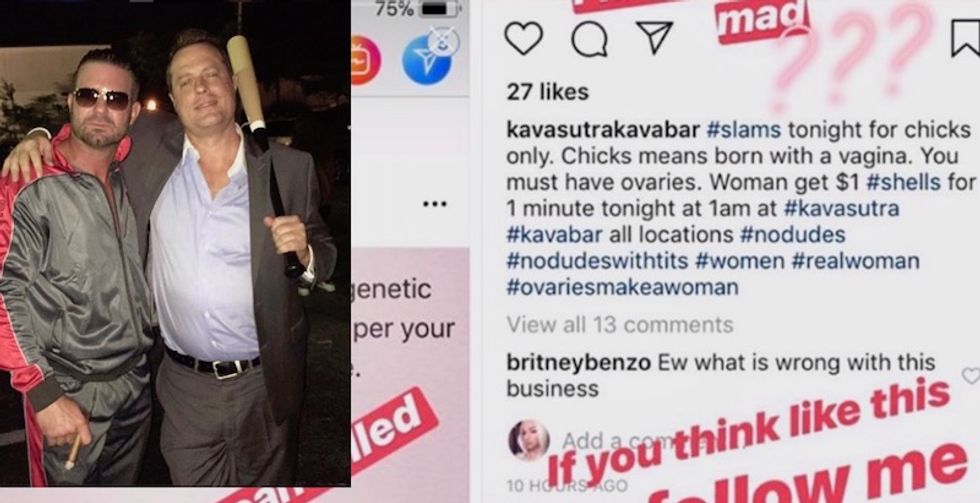 A Florida kava bar's hate-filled and transphobic Instagram screed about "the point of ladies night" led to an altercation in which sheriff's deputies came after drinks were thrown and pepper-spray deployed, Miami New Times reports.

The altercation happened at Kavasutra Kava Bar in suburban Miami, which serves a drink called kava, which originated in the Pacific islands. Kava tastes like peppered dirt but gives drinkers a mild euphoria and makes them relaxed.

According to Miami New Times' Laine Doss, the situation started when Kavasutra posted a transphobic invitation for "genetic females."

"If you are a chick per your DNA, well m'lady, it's slam time. #slams tonight for chicks only. Chicks means born with a vagina. You must have ovaries," the post said.

The post received a barrage of angry comments but doubled-down, saying that "the point of ladies night is to get ladies in the door so the men can bang them. If there's no vagina then they don't qualify because they don't benefit the business and the plan."

The bar later claimed their page was hacked "just like Joy Reid." The bar also issued a statement saying that it was "virulently and adamantly opposed to discrimination in all forms" and that "inequity or prejudice will be met with swift physical removal from in or around our establishment."

The bar has a history of posting Conservative memes, such as one targeting Maxine Waters and one mocking the plight of children being detained by ICE.