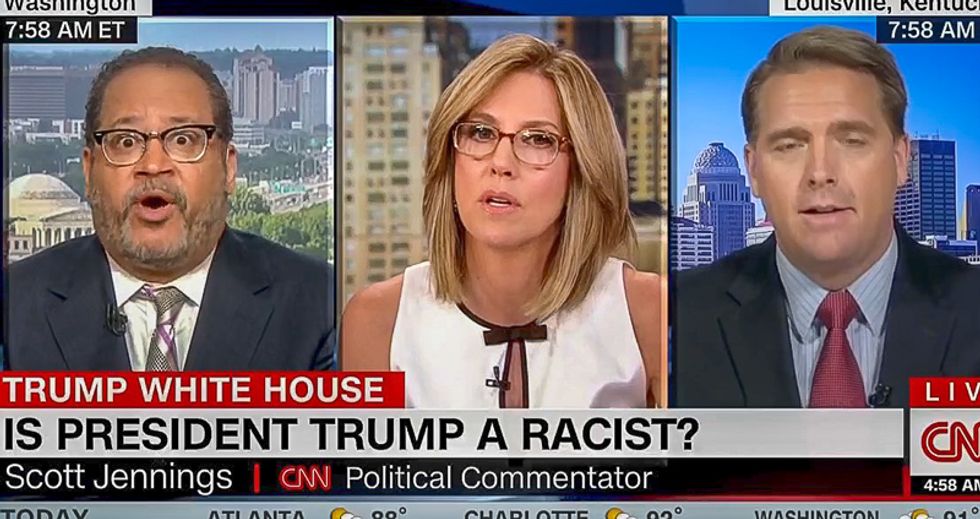 Georgetown University professor Michael Eric Dyson on Thursday challenged CNN conservative commentator Scott Jennings after he refused to acknowledge that some of President Donald Trump's actions are that of a racist.

CNN host Alisyn Camerota pointed out in a segment with Dyson and Jennings that a new poll shows that half of Americans believe Trump is a racist.

Jennings dismissed the poll, saying it is a "reflection of the extreme political polarization" in America.

"We are willing to ascribe all of the worst motivations to every policy view, to every action that our political opponents take," he opined. "In this case what the people who disapprove of Trump believe he’s a racist and everything he does must be rooted in racism."

Camerota, however, reminded Jennings that Trump had a history of racist behavior.

She continued: "He perpetuated birtherism, called Mexicans entering the country rapists and criminals, he refused to renounce David Duke as you may recall, he said the Central Park five were all still guilty despite DNA evidence to the contrary, he said a judge could not be impartial because he had Mexican heritage, he said there were people — fine people on both sides of the Charlottesville protest that involved white supremacists, he attacks NFL players for kneeling, he referred to Haiti and African countries as blank hole countries."

Jennings refused to acknowledge that any of Trump's actions show racist tendencies.

"No, I don’t believe they’re racist," he insisted. "I believe they are not well informed."

Dyson interrupted with sarcasm: "Yeah, the KKK just is looking for a discount on linen, it’s not a racist organization, they just wear sheets when they get up at night and sleep walk."

"So here’s the problem," Dyson remarked. "Martin Luther king Jr. said it’s not the white supremacists who are the problem, it’s white moderates and conservatives who are complicit by trying to dismiss it."

"Brother Jennings, much respect for you but what you’re doing is egregious because you’re attempting to make valid what are essentially naked raw statements of racism," the Georgetown professor said. "This is easy stuff. This is very very clear that it has racial animus here and you’re trying to dismiss it as a difference of opinion. That is complicit in the racist element we’re talking about."

"I disagree with everything you’ve said," Jennings shot back. "I disagree with the motives you’ve ascribed to me and I think most Republicans and conservatives are tired of being called by the American left that they’re racist or complicit in racism."

"You’re welcome to come on here and call me that but it won’t help what you want to get out of this country?" Jennings charged.

Camerota wondered how Jennings could "gloss over" Trump's racist actions.

But Dyson interrupted, complaining that Camerota was "giving oxygen to a guy who is trying to legitimate and validate racism."

"It's far worse than even what the president is doing?" Dyson said.

"No, I do not believe the president is a racist," Jennings said after Camerota again reminded him of some of Trump's hostility towards African-Americans.

"Here’s the point," Dyson stated. "We have a clear-cut example of racial animus, at the very least racially disparaging comments, racial inclinations that are outside not only the norm of what we accept is humane but [Trump] has emboldened white supremacists to come forward."

Dyson added: "Until white folk like you can stand up and find your spine, you will continue to be complicit in the racist animus of this country."

Watch the video below from CNN in two parts.