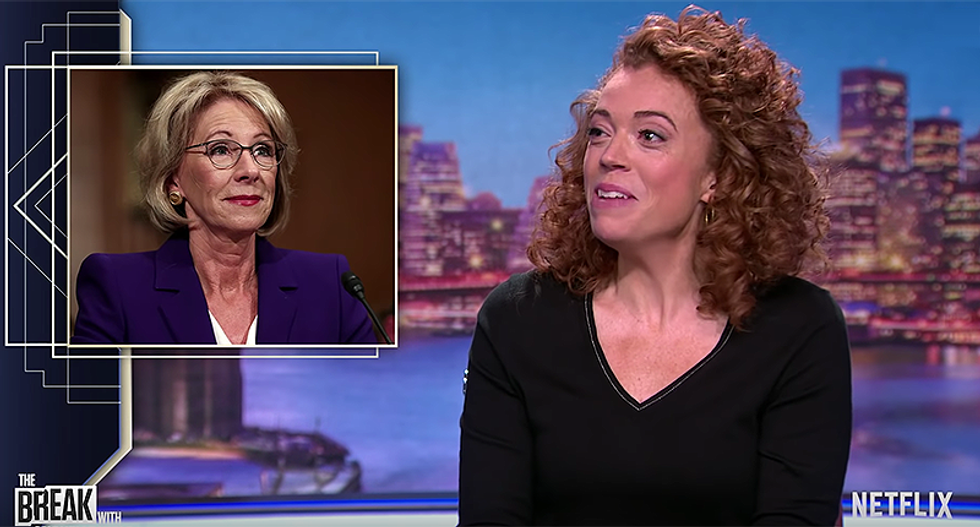 Rep. Maxine Waters (D-CA) urged activists to take to the streets and be loud in proclaiming their opposition to those who support President Donald Trump's policy of separating families at the border. Comedian Michelle Wolf wants to help activists with the cause.

In her Sunday show, Wolf echoed Waters' call to action, explaining, “You can’t just casually harass these people, you have to insult them specifically. You’re a c*nt’ doesn’t hurt them. It’s on their vision board.”

“If you see Ivanka on the street, first call her Tiffany,” Wolf said with a smirk. “This will devastate her. Then, talk to her in terms she will understand. Say, ‘Ivanka, you’re like vaginal mesh. You were supposed to support women, but now you have blood all over you and you’re the center of a thousand lawsuits.’”

Wolf explained that even when crushing someone's soul, there's an etiquette to follow.

Next was Senate Leader Mitch McConnell (R-KY). She urged anyone seeing McConnell at a restaurant to smile before pulling the chair out from under him and asking, "How do you like having a seat stolen from you?"

When it comes to Environmental Protection Agency chief and top scandal director for the Trump cabinet, Scott Pruitt, she urged activists to try to give him a hair cut. When he asks whether or not you're a real barber, say, "I'm as qualified to do it as you are to run the EPA.

After Pruitt, Wolf couldn't help but return to the first daughter again.

“Ivanka, you’re like that birth control pill Yaz,” she said. “At first it seemed like it’d be really cool and helpful, but you need to be immediately recalled.”

When it came to Education Secretary Betsy DeVos, Wolf urges activists to encourage the billionaire to "go f*cking f*ck herself back to whatever f*cking clam she fell out of."

“Is your nickname herpes? Because you’re not necessarily the most dangerous person in the administration but you’re very unpleasant, totally incurable and you always show up when we’re about to get f*cked,” she joked.

Watch the full guide below: