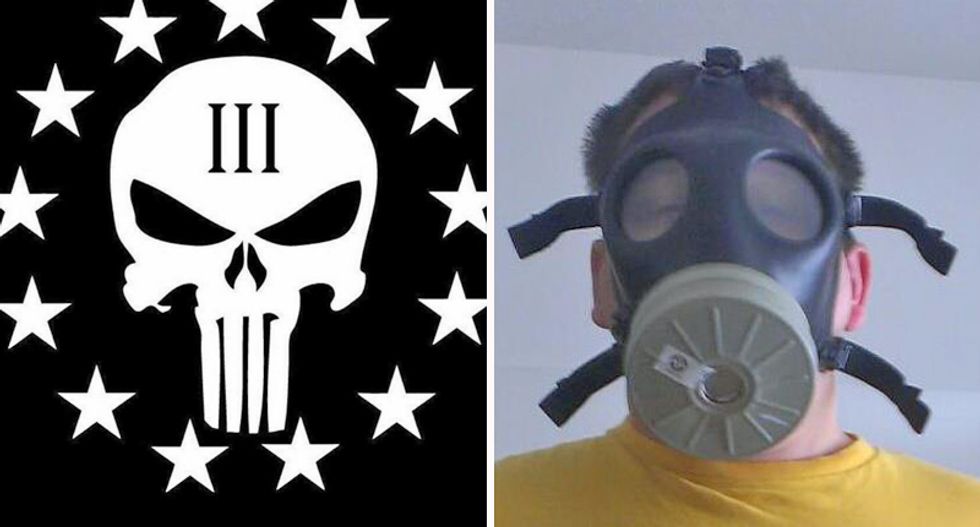 The III Percenter logo that Joshua Daniel Miller featured on Facebook and a photo of Miller wearing a gas mask, composite image.

Police have concluded that a two men are dead of a murder/suicide committed by a man affiliated with multiple anti-government militia movements, the Southern Poverty Law Center revealed.

In the early morning hours of June 30, Hillsdale County Sheriff's deputies responded to a report of breaking and entering at a Camden, Michigan residence, with the call upgrade to "shots fired" before the officers arrived at the scene.

Deputies found Eddie Coleman Heathcoe, 23, of Grand Bay, Alabama with multiple gunshot wounds. Heathcoe was lying unresponsive on the floor and was pronounced dead at the scene.

She told deputies that Josh Miller had killed Heathcoe for attempting to intervene in an argument he had started with his ex-wife.

Three hours later, police responded to a vehicle that had crashed through some trees and stopped in a field. There they found Josh Miller with a fatal, single gunshot wound to the head.

"Hatewatch has confirmed Joshua Miller’s affiliation with the III Percenter militia movement, via Miller’s Facebook postings," SPLC reported. "A photo posted by one of Joshua Miller’s close friends appears to show Miller and his friend posing with other members of the American Patriots III Percent Indiana militia group."

"Further, Miller may have participated in a smaller militia group in Michigan (e.g. the Roughnecks) comprised of himself and two friends, according to Miller’s Facebook photos," SPLC added.

Miller explained on his Facebook profile that he had joined the militia movement as "part of how I save lives" and "how I chase off the monsters and demons in this world."

"Yes I own an AR-15 and several other semi-auto weapons high capacity magazines a full set of tactical gear and many other things," Miller admitted. "Owning these things doesn't make me a bad guy."

"In fact it's quite the opposite really that's part of how I save lives by having those tools but more importantly learning how to use them properly with respect," he continued. "That's how I chase off the monsters and demons in this world."

Miller, who police have concluded murdered a man at 2:30 in the morning, said militias exist to protect from the type of situation he created.

"That's how I keep the things that normally go bump in the night quiet," he argued. "That's why I joined a local militia even if you don't like guns there's always something to learn."

"Extremist ideology likely provides a foundation for violence because it offers a ready-made list of enemies, promotes an “us versus them” mentality, creates feelings of isolation, provides justification for violence, and spurs fear and paranoia," SPLC noted. "This can often lead violence prone perpetrators further down the path of anger, distrust, and depression, which may lead to violent action."

The Hillsdale County Sheriff's Department has closed its investigation after ruling it a homicide/suicide.