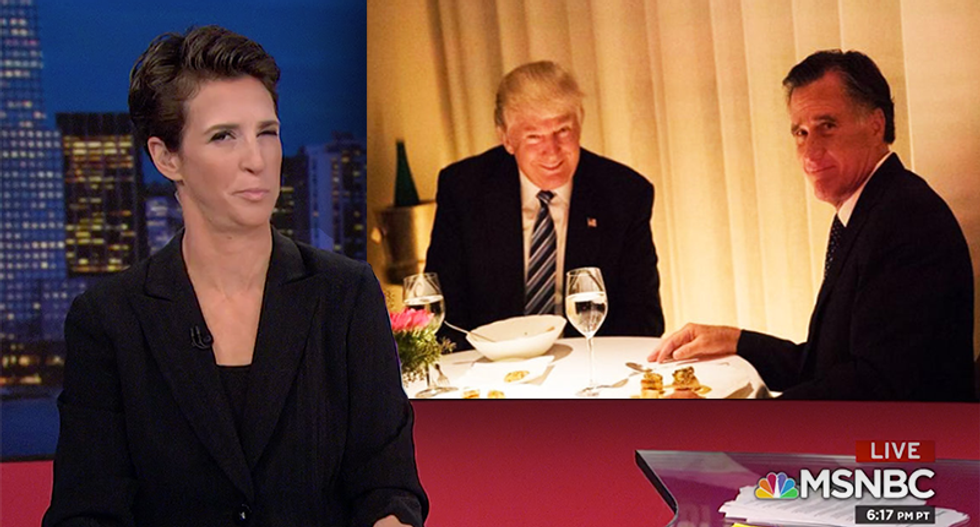 After the notorious Christopher Steele dossier, the British ex-spy authored another short report about the Russian attempt at getting Trump not to pick Mitt Romney to be the Secretary of State after the 2016 election. When alleged Russian spy Maria Butina's indictment came out, it was revealed that Steele's report could be corroborated with her interactions back in Russia.

Aleksandr Torshin, the deputy head of the Central Bank of Russia, spoke with Butina online about who Trump might nominate for the top cabinet post and how she felt about it. That fact jumped out to Maddow because the second Steele dossier had warned of exactly this.

An unnamed Russian government official said he was "relaying talks circulating in the ministry of foreign affairs," Maddow said. "What he heard was astonishing. People were saying the Kremlin intervened to block Trump's first official choice for Secretary of State, Mitt Romney."

The Wall Street Journal then published a report that after the election "Russian-backed online trolls flooded social media to try to block" Romney.

"Several most popular accounts linked to a pro-propaganda agency slammed the governor encouraging their tens of thousands of followers to take action," Maddow read. "We all know how this story ends. Trump picked as his Secretary of State, not Mitt Romney but out of nowhere, the Exxon CEO, Rex Tillerson whom Vladamir Putin had previously ordered the Russian Medal of Friendship in honor of the big oil deals they did together."

She went on to wonder where Trump came up with that idea. How Russian trolls knew to attack Romney and why were they all publicly delighted when he chose Tillerson?

Watch a piece of her opening segment below: