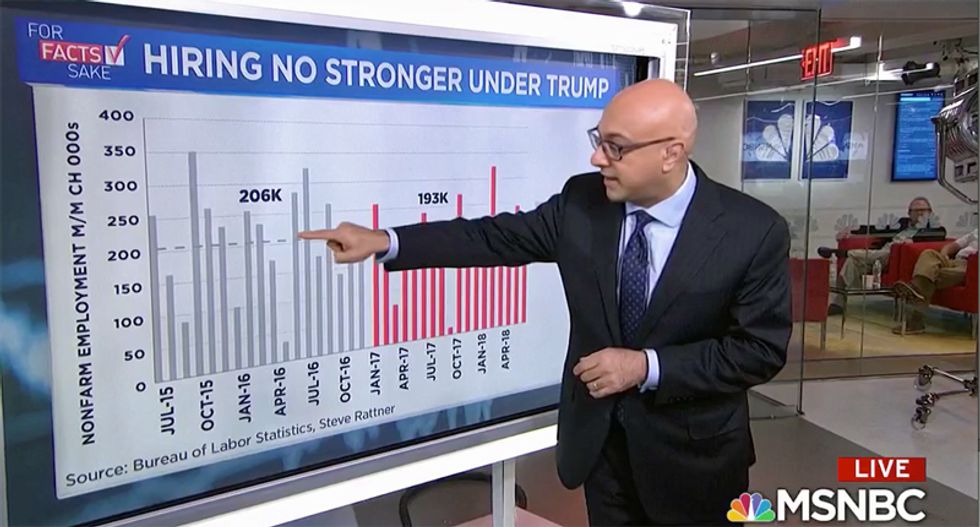 The host's of MSNBC's "Velshi & Ruhle" presented viewers with a "For Facts' Sake" segment examining President Donald Trump's claims about the state of the economy.

"Let's take a closer look at some of his claims," Stephanie Ruhle suggested. "Ali, the president is fantastic at selling the economy. He's great at it and businesses large and small feel good about his pro business policies."

"But apparently on Friday, he wasn't good at selling, he was good at lying about this," Ali Velshi replied. "Things are good economically, but the president can't help himself when it comes to some lying."

Vehsli then went to a touch screen for a "For Facts Sake" segment on Trump's claims.

The MSNBC anchor debunked Trump's claims on an economic turnaround, quarterly growth, the size of the GOP tax cuts, hiring during the Trump era and wage growth.

"The benefits of the Trump plans are not reaching the average wage worker, not reaching the middle class, it's why the Democratic wave seems to be getting bigger, not smaller," explained Stan Collender, founder of "The Budget Guy" website.

"Wage growth is not as high as it should be or would be expected at this particular moment," he continued. "More importantly, there's no expectation that it's going to get better."

Collender explained, "it's not just wages, it's that interest rates are rising, inflation, you have got a variety of things that are making it more difficult to live day-to-day than it is to make it easier.

He was also asked about the likelihood of a government shutdown.

"I think the chances of a shutdown are sixty -- six zero -- percent," Collender predicted.

"The president is going to look at this as his last-ditch effort to get money for his wall, especially if he sees a democratic wave coming," he continued. "So it's at least 60 percent at this point."