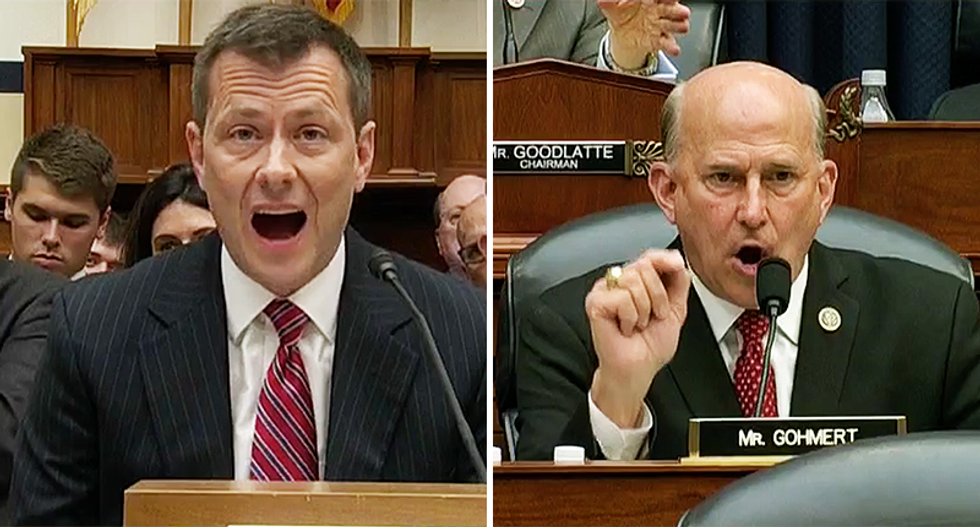 Last week's nine-hour and 41-minute hearing with FBI counter-intelligence deputy Peter Strozk was an exercise in futility, according to one NBC News political reporter.

During a Sunday MSNBC panel discussion, Mike Memoli explained that Republicans had a goal of trying to invalidate special counsel Robert Mueller's investigation by discrediting the basis by which the investigation began. They hoped to paint Strzok as overtly-partisan and out to stop President Donald Trump from being elected.

"But you wouldn't know it from the questions they asked," Memoli said. "They all asked questions about the text messages, which are hard to defend and Peter Strzok tried to apologize for them."

The problem that the GOP members on the committee ran into, however, was that they also wanted to impress one person in particular, who was likely watching the hearing: Trump.

"I thought a Democratic staffer had an interesting point," he continued. "They all want to be part of the highlight reel on Fox News."

When it comes to whether or not the Republicans changed the public perception of the Muller investigation, however, Memoli said that the GOP didn't "do themselves any favors in terms of the public."

In another part of the conversation, Daily Beast reporter Betsy Woodruff noted that Strzok was the first person to publicly say that the Christopher Steele dossier was not the thing that sparked the investigation into Trump and Russian involvement in the 2016 election.

The Republican House committee found that George Papadopoulos was the spark that ignited the fire. She explained that even Nunes' HPSCI investigation didn't rule out the dossier as the source of opening the investigation.

Jeremy Bash, who once served as the chief of staff to the CIA and Department of Defense, reiterated that Strzok hasn't been part of the Mueller investigation for over a year and a half. As such, the investigation as it is known today, cannot be linked to the FBI agent.