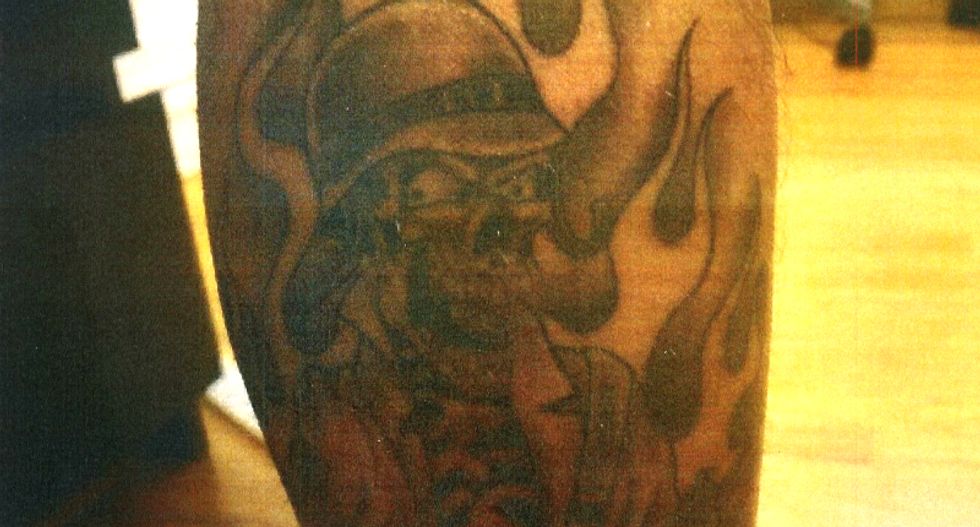 A skull tattoo on the calf of LA Sheriff's Deputy Samuel Aldama, who worked at the Compton Station and was involved in the shooting death of Donta Taylor in 2016. Image via Sweeney Firm / Glickman & Glickman.

Between 10 and 20 deputies at a Los Angeles County sheriff's station in Compton have the same skull tattoo — and it may signify their involvement in the type of sinister clique the department has struggled to rid itself of for decades.

The Los Angeles Times reported that Samuel Aldama, a deputy involved in the fatal 2016 shooting of a man named Donta Taylor, admitted that "he and 10 to 20 of his colleagues at the station had the tattoos but denied there was a formal clique" during a deposition for the family's wrongful death lawsuit.

Lawyers for Taylor's family argued that the tattoos illustrate that "there is a clique tied to the killing, which they allege was racially motivated," the Times noted.

Aldama was reportedly vague during the May deposition where he revealed the existence of the tattoos, denying that it signified any club or clique, but rather that it was bestowed upon deputies who the others lauded for "working hard."

While the deputy was on the witness stand, John Sweeney, the attorney for Taylor's family, asked him if he has "any ill feelings toward African Americans in general." Excerpts of the deposition, as reviewed by the Times, showed that Aldama asked the attorney to repeat the question, said he "did have feelings," and explained that black people are "just human beings" when asked to elaborate.

"Sweeney asked again if the deputy had any ill feelings, emphasizing 'ill,'" the report continued. "Aldama, after another lengthy pause, said that he did."

A minute later, however, the deputy said he didn't understand Sweeney's question and that he doesn't "have any ill feelings" towards African American people.

The Times report noted that the LA County Sheriffs Department has a long history of tattoo-signified cliques and at least one of which — the Lynwood Vikings — was described as a "neo-Nazi, white supremacist gang" by a federal judge. In 2013, seven members of the Jump Out Boys, a clique of LA sheriff's deputies who prided themselves on killing gang members in their mostly black and Latino precincts, were fired from the department after the motives of their group were revealed.