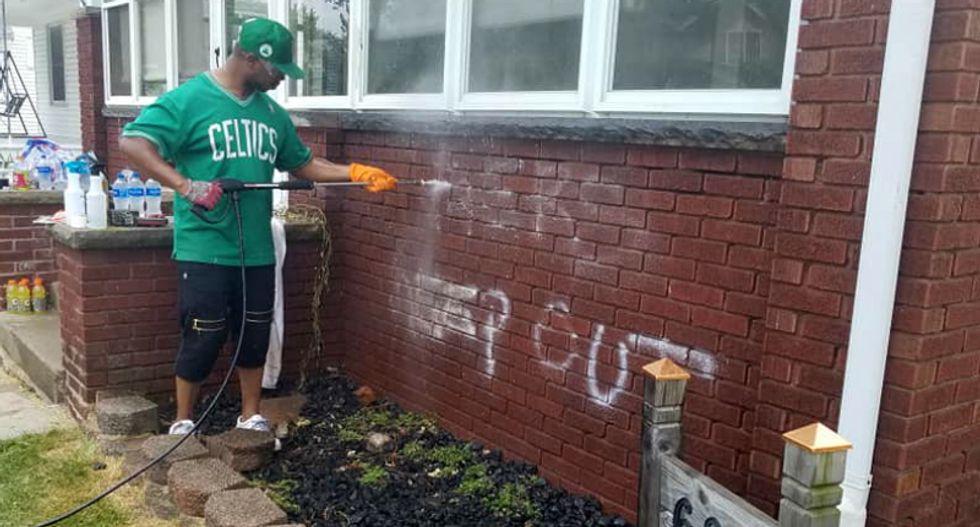 A Toledo, Ohio resident scrubs off racist slur graffiti the day after a woman spray-painted it on her neighbor's house. Image via City Councilman Peter Ujvagi/Facebook.

The day after a woman spray-painted a racial slur and the words "Hail Trump" on a for-sale house, residents of Toledo, Ohio came together to wash the words of hatred off their fellow citizen's walls.

The Toledo Blade reported that 47-year-old Patricia Edelen was arrested and charged with ethnic intimidation and criminal mischief and property damage after she vandalized a house on her street with the Trump and Hitler-inspired slogan along with the words "n**gers keep out." The report noted that the vandalism took place hours before the city's annual African-American Parade a few miles away.

Monica Davis, the realtor selling the property, posted a Facebook livestream as she went to investigate the graffiti, which neighbors witnessed and recorded prior to Edelen's arrest. In the video, Davis's realtor sign was visible mere feet away from the racial slur.

Toledo Councilman Yvonne Harper told the newspaper that she went straight from the African-American parade to the scene of the graffiti, which she described as "eerie" to witness in her town.

"Overnight a racist, hate crime [occurred] in Toledo," he wrote. "Today a dozen Toledo citizens, [without] being asked by anyone, came together to try and eliminate the stain on our heart."

"I have never been more dismayed and than more proud of Toledo than today," Ujvagi wrote.