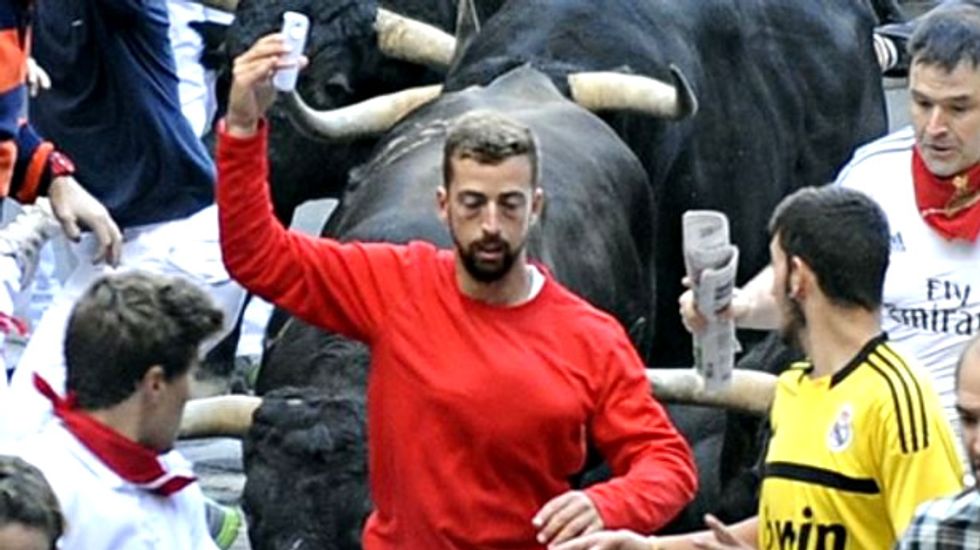 Officials in the Spanish city of Pamplona are seeking to reassure women that its annual bull-running festival this week is safe to attend after the assault of a young woman at the 2016 event sparked protests for tougher punishment of sex crimes.

The festival, a raucous, alcohol-fueled event where mostly men volunteer to be chased by bulls down narrow streets, begins on Friday. Suggestions of a boycott have circulated on social media as anger persists over the 2016 attack carried out by five men who called themselves the “Wolf Pack”.

Earlier this year a court cleared the five of raping an 18-year-old woman at the festival in 2016, convicting them on the lesser charge of sexual abuse. Their release on bail last month sparked renewed protests.

The case shone a harsh light on gender inequality in Spain, but also on sex crimes at festivals against which Pamplona authorities began a crackdown in 2014.

“Faced with calls not to come to the festival, I would make a call to women that Pamplona is a city whose institutions and society have said they will not allow assaults,” said city councilor for security and community Itziar Gomez.

“This is a safe place with social, institutional and police support.”

Gomez and her colleagues at Pamplona’s municipality have launched a campaign called “Pamplona - free from sexist assault”.

“Now more than ever we women have to fill the streets, fill the ‘fiestas’ and fill the night because you will have that assurance that there are women in the street with you,” said Laura Berro, city councilor for equality and LGBTI issues.

Some women plan to wear black instead of the traditional white outfits this week to show their disgust at the rape acquittals.

The Wolf Pack case has coincided with a feminist resurgence in Spain. Chants of “I believe you, sister” and “Drunk and alone, I want to get home” have rung out across town squares and taken on a similar weight to the #MeToo label used to denounce sexual harassment in the United States.

Facing calls to ramp up equality policies, Spain’s new Prime Minister Pedro Sanchez has appointed a female-dominated cabinet and reinstated a ministry for equality headed by the deputy prime minister.

Prompted by the Wolf Pack case, his government also pledged training for judges in gender equality and to review the definition of sex crimes in the penal code. He is under pressure to do more.

Sofia Castanon, a member of parliament for anti-austerity party Podemos, whose support was key in helping Sanchez overthrow his predecessor in June, welcomed the prime minister’s cabinet makeup and the equality ministry but said: “Gestures are not going to cheer me up. They mean we can demand actions.”

CUT OFF FROM SOCIAL REALITY

Pamplona’s clampdown, coordinated with thousands of police officers, specialized staff and helplines in dozens of languages to deal with incidents, dates from before the Wolf Pack case but has now taken on national significance.

“We’ve become a city with an extremely high level of awareness,” Gomez said.

More women now report sexual misconduct such as groping in crowds and police have a high record of detaining perpetrators, she said.

Eurostat lists Spain 17th among European countries for the prevalence of sexual assault, with 18.6 reported per 100,000 of the population in 2015.

The numbers rose in the year of the Wolf Pack assault, and quarterly data from the interior ministry indicates they continued a steady upward path throughout 2017, before climbing a further 14 percent nationally early this year.

Women’s groups say the increase is due to more victims coming forward, indicating greater awareness of what constitutes sexual assault and more faith in the official response.

Gender inequality in Spain’s law and judicial system has become a major focus of women’s rights’ campaigners. Sanchez’s government has given few details about its planned review of the penal code, but much of the criticism of the ruling has been aimed at those applying the law.

“With some exceptions of course, judges in this country are generally cut off from social reality, have been educated in a patriarchal system, and have more empathy with men than women,” said Altamira Gonzalo Valganon, vice president of Themis, an organization of female legal experts.

Some hope the powerful response to the Wolf Pack case and the outpouring of sympathy for the victim could encourage more sexual abuse sufferers to come forward.

“The sentence is an embarrassment because it’s as though the victims need to justify something, when they are the ones who suffered,” said Maitane Hermoso de Mendoza, 26, who works in a bar in Pamplona.

“After this case, people are taking all these things more seriously. It’s sad to say, but it has served to make people more aware of what’s going on.”