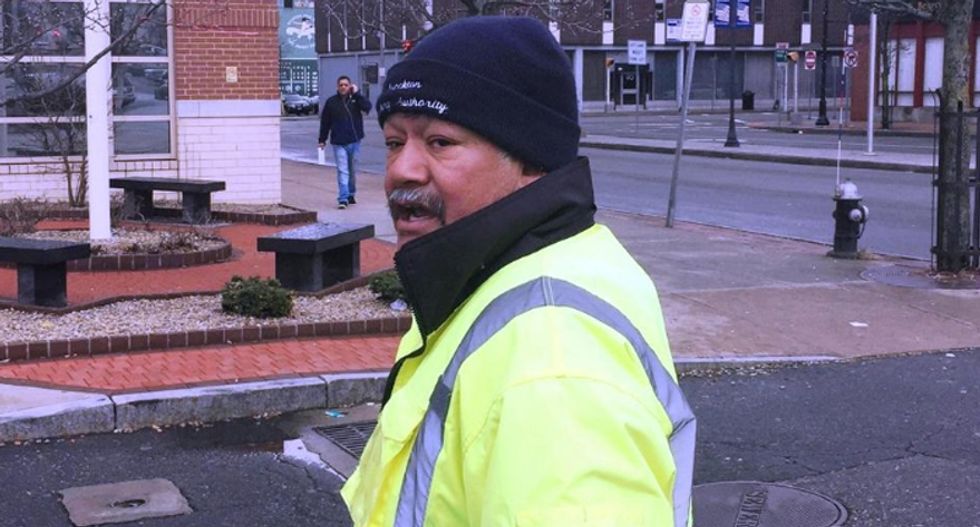 The city of Brockton, Massachusetts is being sued after a parking control officer used the n-word while ticketing a black man with an amputated leg for parking in a space reserved for people with disabilities, The Enterprise reports.

The lawsuit alleges malicious prosecution, race-based discrimination, a conspiracy to deprive him of his constitutional rights, failure to intervene, and violation of due process rights.

In 2017, the lawsuit states, Williamson drove his pregnant wife and infant son to a medical appointment at the Brockton Neighborhood Health Center.

Williamson, who walks with the aid of a cane and artificial limb after his left leg was amputated, says he hung his disability parking placard from his review mirror.

When Delgado, Brockton's parking control officer, began typing on a handheld device, Williamson got out of his vehicle to show his placard.

When Williamson asked why his state-issued placard was being ignored, Delgado allegedly called him a "n****r."

Two citizens happened upon the interaction, with one being so appalled he said he would be calling the mayor's office to report the racial slur, The Enterprise reported.

"Go right on ahead, I don't give a f*ck," Delgado allegedly replied.

Delgado claimed Williamson had a knife and threatened him, a contention that was proven false by surveillance camera video.

“The Brockton Police Department should have cleared Mr. Williamson then and there, and saw to it that Mr. Delgado was fired from his city job for using a racial slur against Mr. Williamson, and lying,” said Daniel W. Rice, a Braintree-based attorney representing the plaintiff. “Brockton had Mr. Williamson arrested, jailed, and prosecuted for a serious crime its own police department’s investigation showed he didn’t commit. If this weren’t outrageous enough, Brockton continued to prosecute Mr. Williamson all the way until he was found ‘not guilty’ of the false charges at trial, even though it had somehow ‘lost’ the exculpatory videotape along the way.”

According to The Enterprise, Delgado is still employed by the city with an annual salary of $44,484.

“Apparently, a parking control officer can call a man a ‘n****r’ while he is on duty, make up a ridiculous false cover story about why he called him a ‘n****r’ and get away with it,” said Phyllis Ellis, president of the Brockton Area Branch NAACP.

"According to the lawsuit, Carpenter, Duarte and Crowley did absolutely nothing about this blatant racism by a city worker when given the opportunity to do so,” she continued. “This is very disturbing, if true. Even when evidence was shown, backed up by other police officers, eye witnesses and even a videotape, nothing was done on behalf of Sean Williamson."

“Brockton’s conduct in this matter, therefore, includes the condonation of racism, and a malicious prosecution made even more malicious by its destruction of exculpatory evidence,” Rice said in a statement. “That Brockton’s illegal acts were aimed at convicting Mr. Williamson of a crime, for which he would surely have been incarcerated and had his reputation ruined, is shameful and conscience-shocking."

"Mr. Williamson is justified in seeking substantial damages against Brockton for its illegal conduct," he added.

The NAACP president concluded, "racism is alive and well in the City of Brockton."

"How many lawsuits against the city will it take for us to realize it?” he wondered.