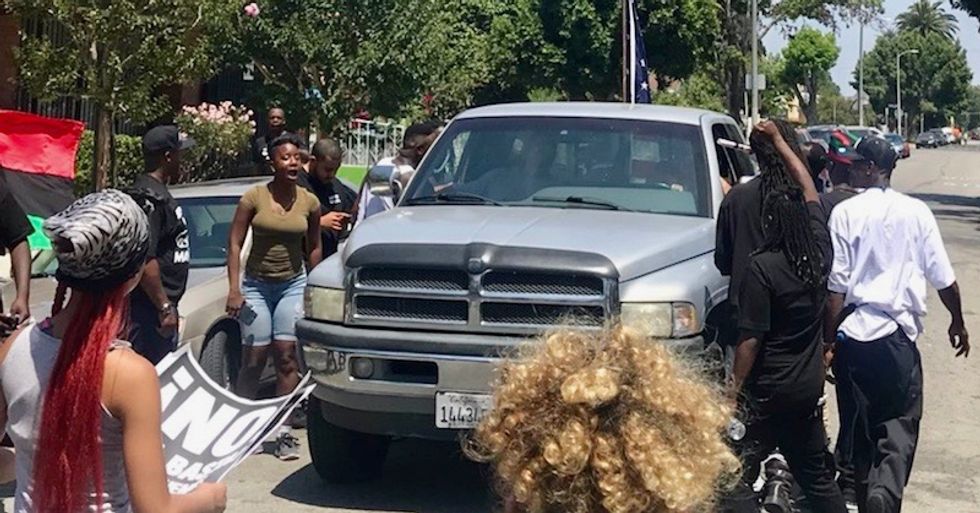 A group of far-right Trump supporters called off their protest of the offices of Rep. Maxine Waters’ (D-CA) after they were met by a group of angry counter-protestors who took their American flag and burnt it, the Los Angles Times reports.

The group, called the Oath Keepers, claims to be made up in large part of retired military personnel who consider themselves "Guardians of the Republic." The radical right-wing group is tracked by the Southern Poverty Law Center's HateWatch project.

They had vowed to protest at the office of the congresswoman who they call a “protest terrorist inciter.”

The group decided not to come after angry counter-protestors reportedly surrounded a car with an American flag, took the flag off and burned it while chanting “F*ck the government. America was never great.”

Among the counter-protestors were several local trade unions and members of the historically black South Los Angeles community.

Outside of @RepMaxineWaters, a group of people who had come to protest the @Oathkeepers are chanting “Fuck the gove… https://t.co/Rq4OpCl7TC
— Benjamin Oreskes🦅 (@Benjamin Oreskes🦅)1532035132.0

An observer said that anyone who looked like a Trump supporter was pushed away by the community that had gathered.

Every so often people who they suspected supported Trump would show amd they would push them out. https://t.co/Que3mBBIzK
— Benjamin Oreskes🦅 (@Benjamin Oreskes🦅)1532035165.0

They surrounded this car, which had a flag on the back. They pulled it off, found some lighter fluid and set it on… https://t.co/H9Zj8fFSMv
— Benjamin Oreskes🦅 (@Benjamin Oreskes🦅)1532035138.0

For her part, Waters had said the group could set off an explosive dynamic in the community but that she welcomed anyone exercising their right to free speech.

Watch a video of the scene from the LA Times below.