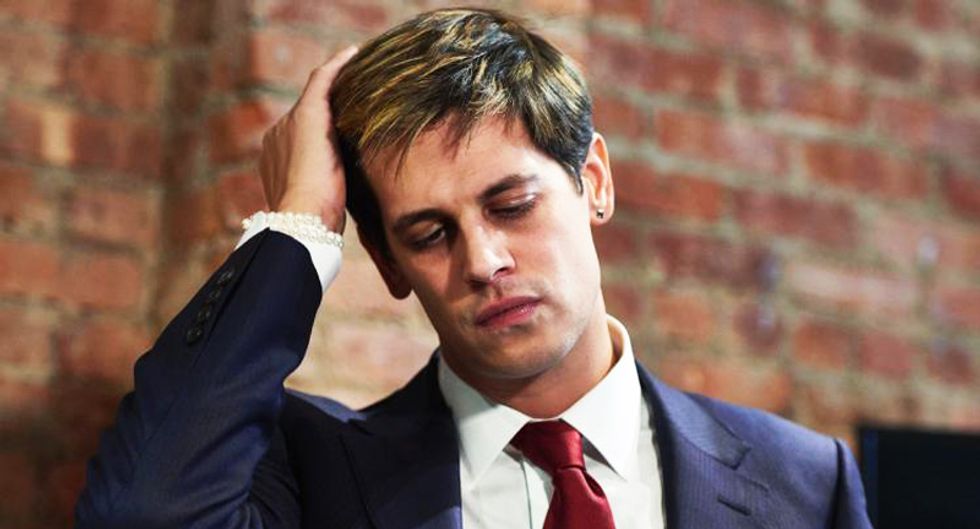 The right has become an epidemic of exhibitionists. Right-wing trolls sidle up to people on TV, the internet and in person pretending that they want a reasoned discussion. When they’ve got your attention, they open their trench coats to show off their firm pointy little “truths,” anticipating your reaction. It gets them excited to see you respond in predictable ways. They have themselves a little trollgasm, proving to themselves once again that they’ve found the formula for flummoxing everyone always.

We react predictably, either with tolerance in the name of civility, gut fury, or by walking away in disgust. The troll exhibitionists are prepared for everything we serve up. That’s what their formula is all about. They pretend it’s about high-minded principles and policy but, of course it isn’t.

It’s a formula for faking invincibility, the same bag of cheap tricks Trump uses. They’re Trump wannabes. Watching right wing pundits and leaders is what first turned them on to the exhibitionist game. Now they play it every chance they get. However decent they are in everyday life, in this sport of theirs they’re just gloataholics addicted to trollgasms.

When they go low, should you go high or low? Either way is fine with them. They know they’ll beat you any predictable way you turn. When you go high, they pretend to go higher, playing moral authority entitled not just to declare what’s true but to play last-word referee deciding what’s permissible in your “discussion” and issuing final rulings always in their favor. They control the debate, steering always to where they can prove to themselves that they’re invincible.

They play high priests presiding over an anything-goes, dog-eat-dog world, where all that matters is cunning – the lowest dogs pretending to uphold the highest moral standards. No need to be consistent so long as they’re on top. That’s their formula for faking invincibility.

They’ll pull out of their butts whatever moral principle they never live by and beat you with it long enough that you’re disoriented, sputtering, flailing or fleeing reliably as clockwork. If you don’t fight back you’re a liberal wimp, a loser. If you do fight back you’re hysterical and whiney. They know you’ll back down eventually and they’ll reign triumphant, legends in their own minds.

Leftists will enable them, counseling you not to fight back, to walk away, or they play lazy judge, declaring a pox on both your houses for arguin. “Shame on you for shaming people. Negativity is a no no” they say hypocritically. They judge you for judging people. They’ll counsel you to take the high road and if you lose just take refuge in your pious failure.

On the left these days, we debate whether to be civil or uncivil, self-controlling or gut-reacting in response. That’s the wrong debate for our times. We’re in the political equivalent of anything goes mixed-martial arts and you’re bringing predictable tai chi or karate. The debate should be about how to surprise them not whether to be gentle or harsh.

Technically, “news” means two things: What’s true and what’s surprising. Mostly it’s the latter. Your predictable responses are not newsworthy. Time to search for something new, especially in one-to-one interaction. You’ve got to flummox the exhibitionist troll. It’s not easy since the whole point of their formula is besting you no matter what you serve up. Still, it’s not impossible once you recognize that their MO is engineered only to beat predictable leftist responses. So try something new, in other words surprising. Disorient them with some response they aren’t prepared for, something that shakes them out of their gloataholic ecstasy.

Here are a few of many tips I can offer based on my ongoing trial-and-error practice sparring with and disappointing right-wing trolls. None of these tips are surefire but then you can’t expect surefire when you’re dealing with people whose zombie mission is to beat you. Still, start your own trial-and-error practice to figure out what unexpecting tricks you can make work, given your temperament.

Stop bringing a nice to a gun battle: Look, you gave universal tolerance, love & civility a fine try. It would work in different circumstances. Now you've got the consolation of thoroughness. Recognize that, with predators like these, it won't work to be nice. It only makes you the equivalent of a Nazi empathizer/enabler.

Post-outrage, cool eyes on the prize: Your gut outrage isn’t helping either. They’ll dismiss you as hot-tempered which will only make you more hot-tempered. Think strategically instead. What will flummox, thwart and disappoint these exhibitionists? That’s the only question anymore.

Don’t be led by the nose: Once you’ve made a solid bet that you’re dealing with a gloataholic troll, stick with it, even if they counsel that you’re being uncivil or misreading them. You’ve placed your bet. Make it a good one and then don’t waffle. Waffle and you’re sure to lose against gloataholics. They want to throw you into doubt anyway they can. Ignore their attempts to take control. They just want to lead you to any corner where they think they’ll win. Don’t let them.

Fire with fire: Any cheap trick they pull out of their formulaic dirt bag, you are now free to use in verbal combat. If they play ump, you play ump more cunningly. When they name call, name call with surgical precision. Whatever cards they meld you’re now free to play. Sure, an eye for an eye leaves the whole world blind, but you going high when these guys go bottomless just speeds up the blinding process. You may come out feeling like you need a shower to clean off the mudslinging you just did. Feel it, but don’t share it with them or you’re dead. Better yet don’t mean everything you say. Like fighters in mixed martial arts – they don’t really hate each other yet they don’t show kindness in the ring.

Spiderweb them: Ever notice how when someone accuses you of being defensive there’s really nothing you can do that won’t affirm the accusation? Silence, consent or denial – makes the accusation stick. Such accusations are like spider webs. The more you fight them the more they stick to you. There are other spider webs, for example, “it’s not all about you,” (“I’m not saying it is!”). Spiderwebbing can be cruel, but it has its place, especially when dealing with gloataholics whose sole purpose is to ensnare you. Ensnare them first.  Look for spiderwebs to entrap them and actually, it’s easy. Call them on their defensiveness, that all they ever do is deflect challenges. When they deny it, say ‘there he goes again.” And do it relentlessly. Here’s more on spiderwebbing.

Talk past them: Fight them with an audience looking on, and then demean them by talking past them to the audience. “See what he did there?” They love an audience since they’re Trump and Hannity wannabes. They want you to interview them as though they’re authorities. You can play the audience to your advantage, not theirs.

Relentless audacity: Leftists, liberals and moderates just don’t know when to quit. They often get gloataholics on the run and then just drop it, led by the nose, or moving on to another subject, a clear sign that they don’t know what kind of battle they’re in. Don’t do that. Be relentless, dogged and tenacious. Remember that, for the gloataholic, it’s all about controlling the debate, not the usual give-and-take of discussion. Don’t worry about being pigheaded with gloataholics. Save that for real conversation. Since, they’re being proudly pigheaded, you have to out-pig-head them. When you challenge them, they’ll always try to pivot or deflect. Pose the same challenge again. And again and again. When you’re ready to change the subject because they’re still pivoting and deflecting, don’t just move on. Mark their failure to deal with your challenge. “See that? I’ve asked four times, and he still won’t answer – proof that he’s only saying “I know you are but what am I?” To which he’ll say “I know you are and what am I?” Say. “See? Again. OK moving on…” Show them that you can out-maneuver them ‘til kingdom come. You’ll be surprised how quickly they back down. Really, they’re only prepared to fight predictable responses.

You’recommitmentto receptivity will get us all killed:There’s nothing more callous than distrusting the trustworthy, but there’s nothing more dangerous than trusting the untrustworthy. Psychologists know better than to ask psychopaths “Really? Do you mean it?” To do so is to enable them, to play right into their dangerous hands. Returning receptivity to someone who just pretends to be receptive dooms you.

So does moderation with gloataholic exhibitionist trolls. America had a nice long run during which we could be both civil and honest, or live and let live with people’s whose behavior we didn’t really have to live with. Now that behavior is encroaching and fast.

George Bernard Shaw said, “Never fight with a pig. You’ll just get dirty and the pig likes it,” but it turns out you can never say never. There will be pigs you’ll have to fight. You will get dirty, but there’s no alternative. If you have to get dirty, at least fight to win and make sure the pig doesn’t like it.

In this crisis we need to learn at long last how to fight to win which means transcending both our old moral niceties, and our predictable gut outrage. It’s time to explore together how to trump the gloataholic, exhibitionist, tantrumplican trolls by any means necessary.

The question now is how to be strategically fierce enough to flummox them while there’s still time. They’ve got the guns but we could have much better rhetorical amo, if we just put our minds to it and stop pussyfooting around as though our guts already know how to react.