Racist NYC bus rider taunts Muslim woman in a headscarf: 'ICE is here for you' 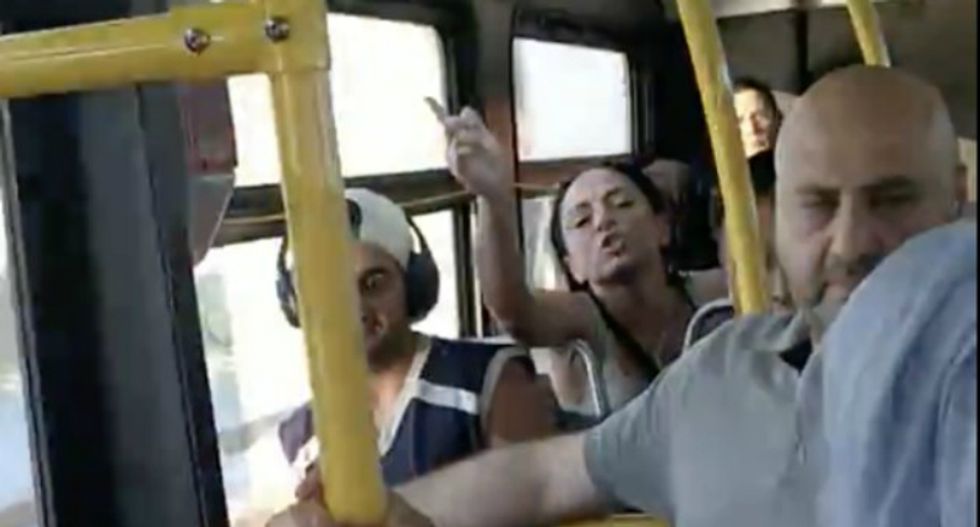 A racist bus rider taunts a Muslim woman during an altercation on a NYC city bus. Image via screengrab.

A racist bus rider taunted a fellow passenger on an NYC bus in a now-viral video, shouting that the hijab-wearing woman is not a citizen and threatening to call Immigration and Customs Enforcement on her.

She then turned her attention to the person filming and addressed them.

"Hi I'm Ashley, if you're taping me," the woman said. "I'm getting into a fight with some Muslim chick because she has an attitude. She thinks she has rights that she doesn't have."

Just before the video ended, the woman who identified herself as Ashley told the crowded bus that "immigration [is] at the door."

The report noted that the Reddit user who uploaded the video to the r/nyc subreddit wrote that before filming, the hijab-wearing woman entered the back of the crowded bus with a stroller. She accidentally triggered the bus' proximity alarm, which led to someone yelling at her and eventually to the racist tirade captured on video.

Gothamist's report also noted this latest video marks the second time in a week that a passenger on an NYC-area bus was caught going on a racist rant. It remains unclear if "Ashley" has been arrested.

Watch video of the woman calling herself Ashley screaming at a Muslim bus passenger below: