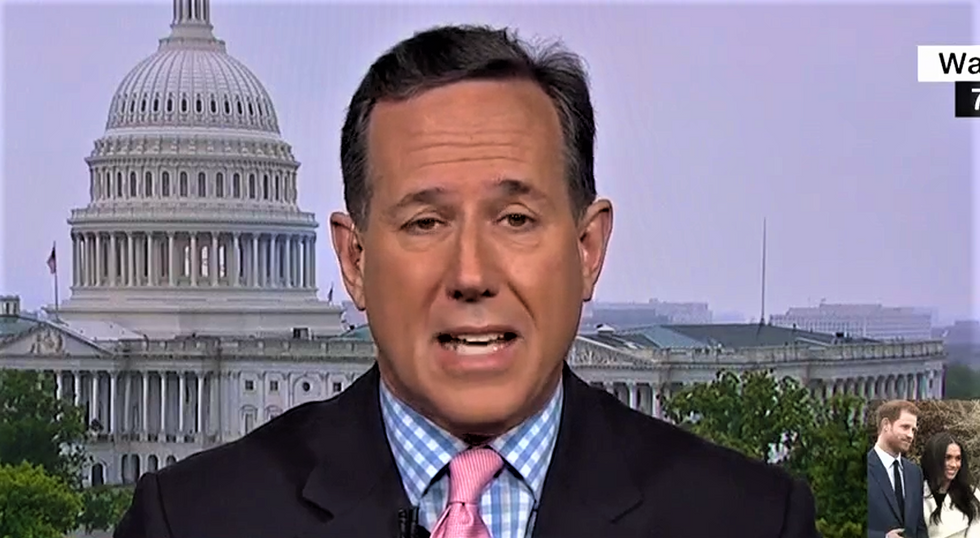 Former Sen. Rick Santorum on Monday was forced to admit that President Donald Trump shouldn't have blamed the United States for poor relations with Russia -- but then quickly tried to pivot to blaming former President Barack Obama.

During an interview on CNN, host John Berman cornered Santorum over Trump's early Monday tweet in which he placed the blame entirely on the United States for having poor relations with the Russian government.

"One of the things the president wrote hours before heading into this meeting was, 'Our relationship with Russia has been worse thanks to many years of U.S. foolishness and stupidity,'" he said, reading directly from Trump's tweet. "The Rick Santorum that I know would demolish a U.S. president for saying that on foreign soil, for blaming the United States for the bad relationship with Russia."

Santorum tried to dodge the question and pretended as though Trump had only described the state of the relationship between Washington and Moscow without placing specific blame for it.

"I would agree that the relationship with Russia has been bad," he began.

"Because of who?" asked Berman.

"Not because of -- well, look the United States under Barack Obama let Russia get away with... we were certainly not tough," he said.

Berman quickly moved to shoot this down, however, by pointing out that Obama never forced Russia to deploy nerve agents against its former agents on British soil.

Later in the interview, however, Santorum conceded that Trump shouldn't have blamed America for poor relations with Russia.

"I would never have countenanced a statement by an American president the way that Donald Trump sent that tweet out," he admitted. "It was wrong."