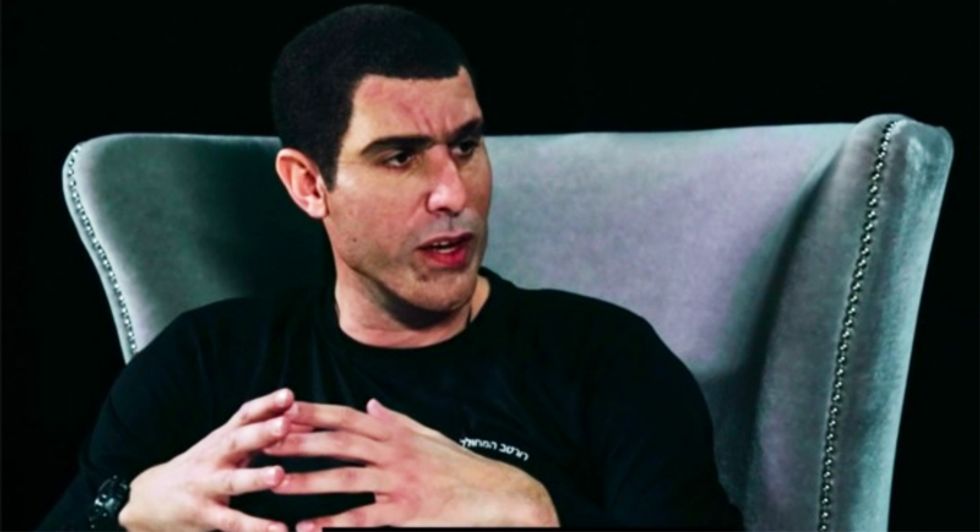 That comedian and chameleon provocateur Sacha Baron Cohen has been traveling the country and duping clueless Republican lawmakers and their supporters has been known for weeks, but as his new show—titled "What Is America?"—readies to drop its first episode for Showtime on Sunday night, clips have surfaced in which actual adults are seen endorsing the preposterous idea of arming children as young as three and four years old with guns in order to possibly intervene in case of a school shooting massacre.

In the first episode of “Who is America?”, previewed for media by Showtime, Baron Cohen poses as an Israeli anti-terror expert who gets two U.S. congressmen to voice support for his fake “Kinderguardians” scheme for children as young as three.

The scheme includes a fake instructional video featuring children’s songs and “gunimals” — weapons adorned with soft toys — that would purportedly help kids confront the school shootings that have plagued the United States for the past decade.

Republican congressmen Dana Rohrabacher of California and Joe Wilson of South Carolina, along with former Senate Republican leader Trent Lott, who is now a lobbyist at a Washington law firm, are shown enthusiastically backing the idea, alongside gun rights advocates and a former congressman-turned-talk radio host, Joe Walsh.

While official trailers have not been released, some on social media have been posting portions of the episode:

In his review for Variety, television critic Daniel D'Addadario says the show is Cohen's best work in some time:

“Who Is America?” feels both as richly comic as anything Baron Cohen has done in the decade-plus since “Borat” and urgently resonant with our own era. The show’s format—using four new Baron Cohen personae in order to expose the nature of contemporary American culture—is particularly effective, moving as it does beyond the boldface names who’ve come forward to say they’ve been pranked by the comic. The first episode, for instance, puts gun lobbyists in conversation with Erran Morad, a former Israeli colonel played by Baron Cohen. “Morad” is traveling the U.S. to learn more about gun policy and to share his full-throated support for a particularly libertine understanding of the Second Amendment; by episode’s end, gun lobbyists as well as past and present members of Congress are on tape endorsing his “Kinder-Guardians” program, designed to teach children of three and four how to shoot.

This is the magic of Baron Cohen at his best: Simultaneously devising bizarre and seemingly impossibly outré bits of social commentary, and knowing the culture well enough to be sure that his targets will be along for the ride. The lengthy “Kinder-Guardians” segment, culminating as it does in a bizarre pro-toddler-riflery PSA endorsed by Dana Rohrabacher and Trent Lott, is the episode’s creative high point. Less engaging is much of what led up to it: An interview between Sen. Bernie Sanders and an Alex Jones-style web-”journalist” (played by Baron Cohen, of course) sees plenty of good jokes but Sanders utterly failing to take the comic bait.