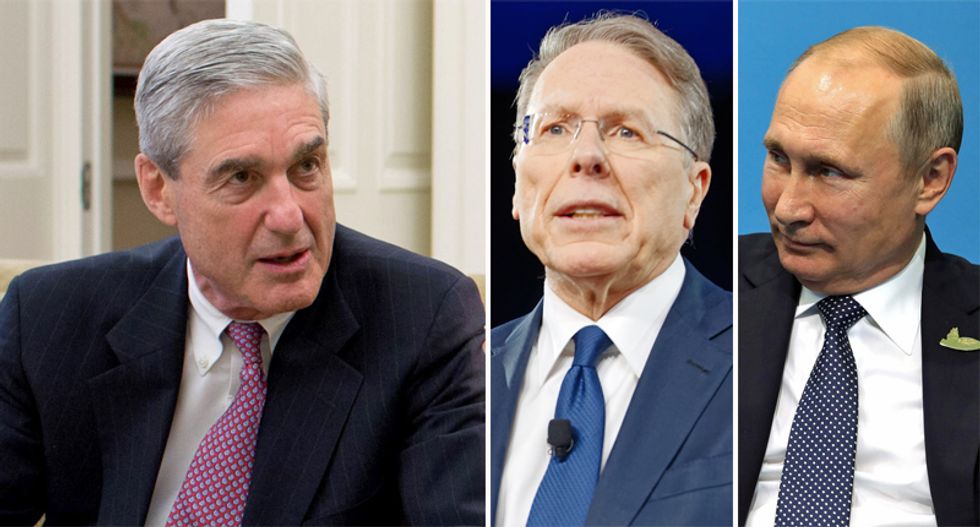 The National Rifle Association (NRA) defense that it is not a focus of special counsel Robert Mueller's investigation into Russian interference in the 2016 presidential campaign does not hold water, McClatchy reported on Monday.

The NRA has claimed that they have yet to hear from the FBI about the investigation.

McClatchy's legal experts say that is because Mueller's investigators did not need the NRA's cooperation to identify any potential Russian funding of the group's record financial backing of the Trump campaign.

It is illegal to spend foreign money to influence an American election.

The Federal Election Commission does not require that the NRA disclose the source of it's "dark money" contributors, but the group was required to provide that information to the Internal Revenue Service.

According to "people familiar with the inquiry," McClatchy reported that, "the main focus of Mueller’s inquiry, as McClatchy reported in January, has been whether Alexander Torshin, deputy governor of Russia’s central bank and a close ally of Russian President Vladimir Putin, arranged for Russian money to flow through the gun rights group to aid Trump."

Obtaining such filings from the IRS would be critical to determine if Russians "used shell companies as part of a scheme to influence the 2016 election," Sen. Ron Wyden (D-OR) argued.

Invoking a famous saying from the Watergate investigations that drove President Richard Nixon from office, Wyden said, "investigators must follow the money wherever it leads to understand the full story of Russia’s attack on our democracy."

One former federal prosecutor told McClatchy that it should be expected that Mueller has already obtained the IRS filings as such investigations frequently use “secret subpoenas, tax orders and other investigative techniques to collect an extraordinary amount of financial information without their target even knowing that the investigation exists."

There are two leading theories on how Russian money could have flowed through the National Rifle Association to influence the 2016 election.

Under the less-scandalous theory, the NRA's hatred of Democrat Hillary Clinton allowed them to become "useful idiots" who were unwittingly used by a foreign power.

"That’s the most innocent explanation: The NRA got snookered," explained Steve Hall, the former chief of the CIA's Russia operations.

“The NRA was naive and got hoodwinked," suggested former NRA spokesperson John Aquilino.

However, there are enough red flags that analysts wonder about the second theory, that the NRA may have intentionally spent foreign money in support of Donald Trump.

"It’s just so insidious, and it sort of ticks all the boxes: connections to the current administration, major backer of then-candidate Trump, the Russians wanting to get in and manipulate our own political system," Hall reminded.