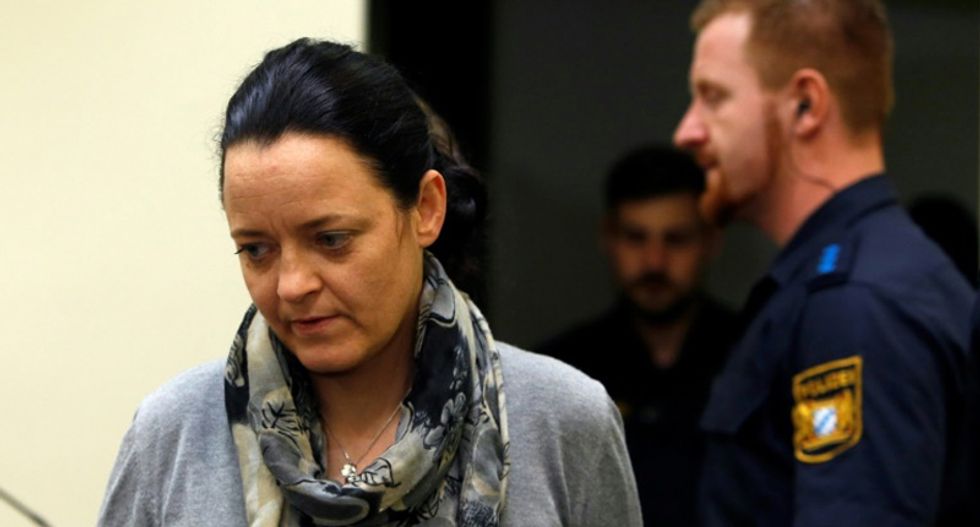 Defendant Beate Zschaepe will hear the verdict Wednesday in her trial for complicity in the murders of immigrants and a policewoman in Germany by a neo-Nazi group. (POOL/AFP/File / Michaela Rehle)

The only surviving member of a German neo-Nazi cell behind a shocking series of racist murders was sentenced Wednesday to life in prison, capping one of the longest and politically charged trials of the post-war period.

Beate Zschaepe, 43, was found guilty of 10 counts of murder for her complicity in the deadly shootings of nine Turkish and Greek-born immigrants and a German policewoman.

Zschaepe and her former lovers Uwe Mundlos and Uwe Boehnhardt had formed a militant clandestine group they called the National Socialist Underground (NSU).

The trio carried out the killings from 2000 and 2007, as well as two bombings and 15 bank robberies, before the two men died in an apparent suicide pact after a bungled bank heist in 2011.

The scope of the NSU's crimes only came to light after the men's deaths, when Zschaepe released a macabre confession video set to a Pink Panther cartoon theme.

Germany, which has long struggled to atone for its Nazi past, was shocked to learn that the series of killings, previously blamed by police on immigrant crime gangs, had in fact been committed by organised fascists from the country's formerly communist east.

Foreign Minister Heiko Maas said on Twitter that the ruling meant Germany was "standing up to racist violence with the strength of the law," and added that "the victims remain unforgotten".

- 'Accomplices still out there' -

The mammoth trial had run since May 2013 and heard 800 witnesses and experts. Critics said many questions remain unanswered, including how the killers stayed undetected for so long and whether some undercover state informants knew of the NSU's existence.

Turkey's foreign ministry said the ruling "unfortunately has not revealed in all its dimensions the background of the NSU murders as well as its links with the 'deep state' and intelligence, and the real culprits have not been found".

Gokay Sofuoglu, chairman of the Turkish community association in Germany, told news agency DPA that for his group's members, "trust in public institutions has been deeply shaken".

In 2012, Chancellor Angela Merkel pledged that Germany would "do everything we can to clear up the murders".

That same year, then head of Germany's BfV domestic intelligence agency, Heinz Fromm, was forced to resign when it emerged his service had shredded files related to the NSU suspects.

The chairman of a parliamentary inquests into the case, Uli Groetsch, said it was clear that the three were "supported by a broad network of neo-Nazis".

On the eve of the verdict, Abdulkerim Simsek, son of the first NSU murder victim Enver Simsek, said: "I'm 100 percent sure that there are still accomplices out there."

The head of the Central Council of Jews in Germany, Josef Schuster, urged the government to take the danger of rightwing extremism "more seriously", especially after the far-right AfD party entered parliament last year, warning this threatened the "erosion of our democracy".

Zschaepe has admitted to crimes such as helping plot bank robberies but insisted she only learnt of the murders after they were committed, and her defence immediately filed an appeal.

The woman who grew up in the extremist skinhead subculture of post-reunification east Germany, last week told the court that racist ideology has "no meaning for me anymore".

Judge Goetzl, painting a picture of the extremism that consumed the group, said Mundlos "hated the multicultural melting pot in Germany" and had even developed an anti-Semitic video game in which players shot Jews.

"Zschaepe took on the far-right views of her environment," said the judge, adding that she formed a firm bond with racist friends.

Among them were four men also convicted Wednesday for supplying the NSU with the murder weapon, cash, identity papers and logistical and moral support during their years in hiding.

Ralf Wohlleben, a former member of the far-right NPD party, was sentenced to 10 years in prison for complicity in nine counts of murder.

Carsten Schulze was also convicted of complicity but got three years under the juvenile penal code, and Holger Gerlach received three years for backing a terrorist organisation.