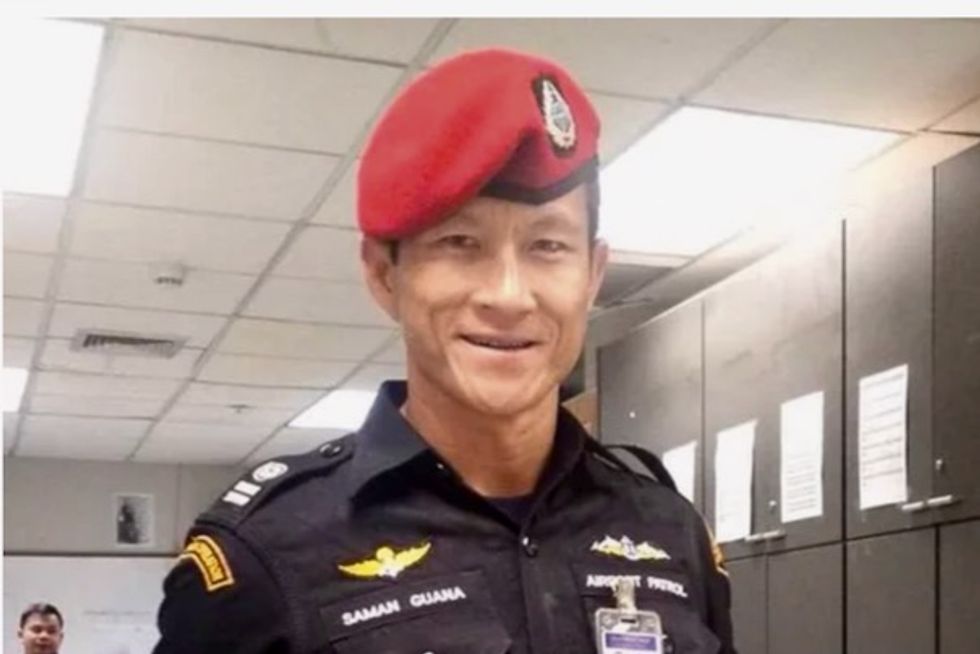 A former Thai navy diver died working to save 12 boys and their soccer coach trapped inside a flooded cave, highlighting the risks for rescue teams trying to find a safe way to bring the group out after 13 days underground.

Dwindling oxygen levels in the cave complex and weather forecasts predicting more heavy rain added to the pressure on authorities to work out a rescue plan.

“We won’t let his life be in vain. We will carry on,” Admiral Arpakorn Yuukongkaew told reporters on Friday.

Saman was working with a partner placing oxygen tanks in a section of the cave. As they returned, Saman fell unconscious about 1.5 kms from the cave entrance.

“Once his mission was over he dove back, but in the middle of their return his buddy found Saman unconscious in the water and tried to pump his heart, but he could not save his life,” the SEAL unit said in a statement.

The diver’s death also highlighted the risks for the boys, who have no scuba diving experience, if authorities decide they should attempt to swim out of the flooded cave.

“A navy SEAL just passed away last night. How about a 12-year-old boy that will have to pass through?” said Rafael Aroush, an Israeli living in Thailand and volunteer at the site.

“There will be rain and many things could go wrong. I don’t want to say it, but it could be a catastrophe,” he said.

Prime Minister Prayuth Chan-ocha expressed his condolences over Saman’s death but it would not deter the rescue teams, a spokesman said.

“Authorities have not lost courage because of this,” Thassada Thangkachan told reporters in Bangkok.

Officials warned on Friday that oxygen levels inside the cave have fallen and rescuers were racing to get more oxygen pipes into the cave. They have been working on a five km (three miles) “oxygen pipeline” to prepare for the group’s extraction.

Rescuers, including international teams, are pondering other ways to bring the group out before heavy rains hit the country’s north next week which could further hamper the rescue operation.

In a rare piece of good news, rescuers on Friday cleared enough water from inside the cave to be able to wade to one of the cave’s chambers located about 1.7 kms from the boys’ location without diving.

Rescue alternatives include teaching the boys to dive and then swim out, a highly risky venture, remaining in the cave for months until the wet season ends and flood waters recede, or drilling a shaft into the cave from the forest above.

The boys, aged between 11 and 16, and their assistant coach were found inside the Tham Luang cave in northern Chiang Rai province on Monday, after nine days underground. They went missing after setting out to explore the cave on June 23.

Rescuers have been slowed by logistical issues including high water levels inside the cave and narrow, flooded passages which would require the boys to dive alone.

The navy is teaching the boys the basics of diving, with a view to guiding them out through flood waters.

But getting them out won’t be easy.

The boys will have to be taught how to use scuba diving gear and how to navigate a cave that has frustrated even the most expert divers. Some of the boys cannot swim.

“Regarding the plan for the 13 to swim or dive, there is only one critical point which is risky: It is where every boy has to dive alone,” Chiang Rai Governor Narongsak Osottanakorn said on Thursday.

Rescuers are considering other options including keeping the 13 inside the cave until the flood waters recede at the end of the rainy season in about four months.

If the weather is on their side and enough water can be pumped out of the cave, the boys could get out the same way they got in, on foot, perhaps with some swimming.

Another option would be to find an alternative way into their chamber, such as drilling a shaft into the cave from the forested mountain above.