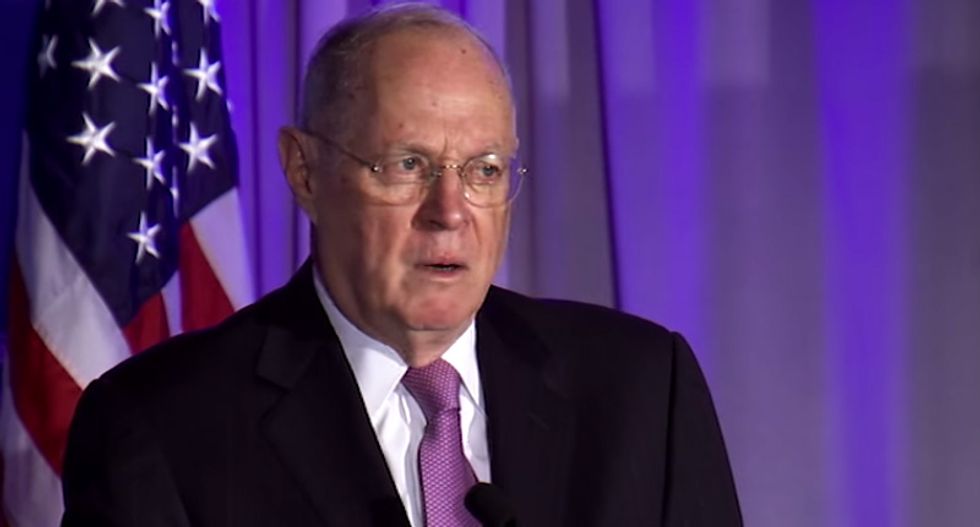 Balzac knew that behind every great fortune there is a crime. But if he were contemplating the retirement of Supreme Court Justice Anthony Kennedy, the great French novelist might have put it another way: Behind every great crime is another crime.

As a way of looking at a presidency that is enamored of every possible felony -- self-dealing, conflicts of interest, emoluments, collusion with foreign governments and domestic corporations -- crime-breeds-crime is a reasonable way to look at any Trump-related event.

But the resignation of a Supreme Court justice?

Because Trump cares so much about money, that’s been suggested. And there’s smoke: the links between Trump, Kennedy and Kennedy’s son Justin. In years past we’d call that the League of White Men, taking care of their own, behind the scenes, The Way It Is. Today we tend to call it something else: collusion.

Here’s why. On the surface, Kennedy’s resignation looked textbook: He’ll leave effective July 31, at the end of the Supreme Court term, as is traditional. But he announced it on June 27. Hand-delivering his letter to the Oval Office was no surprise to the White House, which had a list of candidates ready to roll out. Trump says he’ll announce his nominee on July 9.

If Kennedy had waited a few weeks, some analysts believe Trump couldn’t have gotten his successor approved before the midterm elections. If the Democrats did well in November, it’s at least conceivable they could have blocked any conservative nominee. Approving a nominee before November means our likely future has the court killing Roe v. Wade, giving more power to corporations, turning the poor and minorities into serfs, exiling or detaining Others the president might choose to torture. That’s huge. But let’s consider the bottom line: For Donald Trump, the only real issue of interest is… himself. If a 4-4 Court had to rule on a difficult question -- Does the president have the power to pardon himself? -- it might not go well for Trump.

What started the speculation about dirty money connecting Trump, Kennedy and his son is the revelation that Kennedy and Trump have had a longstanding relationship through their children and their children’s success. We knew about Trump’s dealings with Deutsche Bank, the only bank willing to do business with him. (It’s also, perhaps not coincidentally, the bank that seems to have the longest illegal relationship with laundered Russian money. In January 2017, it was fined $425 million by New York regulators to settle allegations that it helped Russian investors launder as much as $10 billion through its branches in Moscow, New York and London.) But we’re just finding out about the Trump relationship with Justin Kennedy, the justice’s son, who worked at Deutsche Bank for a decade.

Kennedy is bookish and abstract, while Mr. Trump is earthy and direct. But they had a connection, one Mr. Trump was quick to note in the moments after his first address to Congress in February 2017. As he made his way out of the chamber, Mr. Trump paused to chat with the justice.

Mr. Trump was apparently referring to Justice Kennedy’s son, Justin. The younger Mr. Kennedy spent more than a decade at Deutsche Bank, eventually rising to become the bank’s global head of real estate capital markets, and he worked closely with Mr. Trump when he was a real estate developer, according to two people with knowledge of his role.

During Mr. Kennedy’s tenure, Deutsche Bank became Mr. Trump’s most important lender, dispensing well over $1 billion in loans to him for the renovation and construction of skyscrapers in New York and Chicago at a time other mainstream banks were wary of doing business with him because of his troubled business history.

There’s more. New York is a set of villages. The Trumps and Kennedys live in the same one. As C’Zar Bernstein and Gabe Rusk wrote in a little-noticed March 2017 article:

-- At the invitation of Justice Kennedy, Donald Trump’s daughter and former businesswoman Ivanka Trump visited the High Court with her daughter to attend a Supreme Court argument.

-- According to reports, Kennedy and Ivanka had met at the congressional lunch after the inauguration.

But as Stephanie Ruhle of MSNBC has reported, Justin Kennedy left Deutsche Bank long before the money laundering and had no direct connection to the bank's loans to Trump. The more interesting fact is where Justin Kennedy went next -- he became the co-CEO of LNR Property. And that brings us straight to the most immediately vulnerable member of the Trump family, Jared Kushner.

The Kushners' purchase in 2007 of 666 Fifth Avenue for a record price of $1.8 billion is considered a classic example of reckless underwriting. The transaction was so highly leveraged that the cash flow from rents amounted to only 65 percent of the debt service.

As many real estate specialists predicted, the deal ran into trouble. Instead of rising, rents declined as the recession took hold, and new leases were scarce. In 2010, the loan was transferred to a special servicer on the assumption that a default would occur once reserve funds being used to subsidize the shortfall were bled dry.

Instead of foreclosing on the 39-story building, which stretches from 52nd Street to 53rd Street, the lenders agreed last month to reduce the principal and defer some of the interest payments on the interest-only loan and extend its maturity for two years, until February 2019.

Vornado has taken an ownership stake in several troubled Manhattan properties. But the 666 Fifth deal raised some eyebrows because Vornado is also a part-owner of the special servicer on the loan, LNR Partners, of Miami Beach.

The plot thickens. As Bernstein and Rusk note:

-- There was a direct business relationship between LNR and Kushner Companies at the time Justin Kennedy and Jared Kushner were both CEOs. Even the future President was aware of the deal and commented on its respective merits.

-- In 2011, the year in which some of these negotiations took place, Justin Kennedy for the first time was ranked on the New York Observer’s 100 Most Powerful People in New York Real Estate at #36. Donald Trump clocked in at #12. At that time, The New York Observer was owned by Jared Kushner.

The 666 Fifth Avenue deal is generally regarded as the all-time stinker in New York commercial real estate. What did LNR see as the upside? Better question: Was there any upside? As we know, 666 Fifth Avenue went badly for the Kushners, so badly that they were scrambling for a partner. Where might one be?

The Intercept reported earlier this year that Charles Kushner, Jared's father, had discussed a financing deal for 666 Fifth Avenue with Qatari finance minister Ali Sharif Al Emadi in April 2017. A month after that deal cratered, a group of Middle Eastern countries, with Jared Kushner’s backing, led a diplomatic assault that culminated in a blockade of Qatar. NBC News reported that Qatari government officials visiting the U.S. “considered turning over to Mueller what they believe is evidence of efforts by their country’s Persian Gulf neighbors in coordination with Kushner to hurt their country.”

Back in March 2017, when Bernstein and Rusk published their Medium article, they ended on a hopeful note:

We know what the Justice’s son may have done for Mr. Kushner, but what did the President’s children do for Justin Kennedy? How have they been nice to him? Evidently Justice Kennedy knows, and this may have had an impact on his opinion of the Trumps in general and the President in particular. This is perhaps a significant cause of concern for those who hope that Justice Kennedy will try and hold out until after Trump is replaced by a Democrat. Time will tell.

Well, time has told. Kennedy didn’t hold out. Although there’s clearly more to this story than an 81-year-old justice who was ready to retire, I’m thinking Anthony Kennedy’s farewell gift to Trump isn’t just right-wing control of the Supreme Court for the rest of most of our lives. For once, it may not be about the money. The real prize here may be a gold-plated Get Out of Jail Free card.