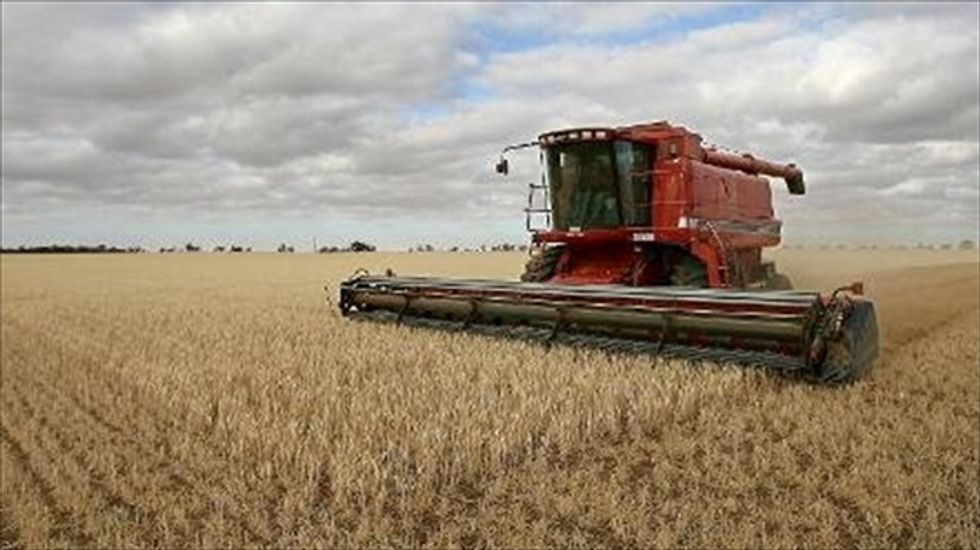 This file photo taken on Nov. 14, 2006 shows a farmer at the wheel of his combined harvester [AFP]

Mexican bread, pasta and flour-tortilla makers are seeking alternative suppliers of wheat to reduce their dependence on the United States as trade relations between the two neighbors deteriorate.

Mexico, the top importer of U.S. wheat, is increasingly turning to cheaper supplies from Russia, which surpassed the United States as the top global wheat supplier in 2016.

Now the U.S. market share decline is accelerating as Mexico casts about for more alternative suppliers in Latin America and elsewhere to hedge against the risk that U.S. grains will get more expensive if the Mexican government imposes tariffs, according to interviews with three large Mexican millers, international grains traders, the top Mexican government agricultural trade official and government and industry data analyzed by Reuters,

“It’s important to send signals to Mr. Trump,” said Jose Luis Fuente, head of Canimolt, a Mexican trade group which represents 80 percent of Mexican millers. Mexico will keep buying American wheat because of its proximity, he said, but “we can’t continue to have this absolute dependence.”

The shifting supply deals are alarming for the U.S. industry, which has supplied the vast majority of Mexico’s wheat since the 1994 North American Free Trade Agreement (NAFTA) took effect.

“The Mexico market ought to be just an extension of our domestic market,” said Justin Gilpin, CEO of the Wheat Commission in Kansas, the nation’s biggest wheat-producing state.

Instead, Mexican buyers plan to import as much as 100,000 tonnes from Argentina - worth about $20 million based on current prices - when it harvests wheat later this year, Fuente told Reuters. Mexico imported a test cargo of 33,000 tonnes in late 2017 after the its government financed a trade mission of grain buyers to find alternatives to U.S. wheat in Latin America.

That same mission also resulted in Mexico raising its corn imports from Brazil, at the expense of sales from the United States. Mexico imported 10 times more corn from Brazil in 2017 than the previous year, and is on course to buy more this year.

Shortly after that trip, Mexico finalized pest-and-pathogen import clearances to allow shipments of wheat from Argentina, which until then had been forbidden.

The White House and the U.S. Department of Agriculture did not respond to repeated requests for comment on how the nation’s trade policy might be accelerating the decline of its wheat industry. The Office of the U.S. Trade Representative declined to comment.

The administration of U.S. President Donald Trump signaled its long-term commitment to tariffs this week when it announced that it would tap a Great Depression-era program for up to $12 billion in aid to help U.S. farmers hurt by the trade war that Trump started.

Global grain merchant Bunge, which runs one of the largest milling operations in Mexico, booked the Argentine wheat purchase together with seven other buyers - even though it cost $1 or $2 more per tonne than U.S. wheat, Fuente said.

Manuel Iriso, CEO of Harinas Elizondo, which operates three flour mills in central Mexico, said the company was seeking the best quality wheat at the lowest cost, a goal it could achieve with a more diverse list of suppliers.

“We want the biggest number of options,” Iriso told Reuters.

Senior Mexican government officials are planning a trade mission to Argentina this week, timed to coincide with the G20 Agriculture Ministerial Meeting, a source familiar with the planning told Reuters. It will mark the third such grains-focused visit in about a year.

But with the country’s wheat now approved for import and the next crop nearly planted, “We are all set to sell to Mexico,” he said.

Mexico will have its own logistic struggles in weaning itself off U.S. supplies, said Raul Urteaga, the head of international trade for Mexico’s agriculture ministry, who confirmed the nation’s effort to expand supplies from Argentina.

“In the near term, it won’t be quick or easy to substitute the existing logistics or (U.S.) import volumes, which are gigantic,” he said. “All of our infrastructure, both shipping and via trains, has been operating this way over for some 40, 50 years.”

But the need for alternative supplies is becoming more pressing as U.S. farmers are nearly finished gathering their winter-wheat crop, and the spring harvest approaches with no sign that the two countries will come to terms in a volatile renegotiation of NAFTA.

If Mexico taxes U.S. wheat imports, Russian and other alternative wheat supplies would be even more attractive for Mexican buyers.

During the first three months of this year, Russian and Ukrainian wheat exports to Mexico totaled 243,000 tonnes - or nine times more than the same period in 2017, according to Canimolt data, making the Black Sea region’s wheat farmers the biggest new source of imports for Mexican millers.

U.S. hard red winter wheat, priced at $240 per tonne or more, is competing with wheat from Russian and the upcoming Argentine harvest - offered at between $202 to $208 per tonne. That more than offsets the higher cost of shipping wheat from great distances.

The Mexican wheat industry “has an agility to exploit opportunities when they arise, whether they come in the form of Russian, Ukrainian, French or Argentine wheat,” said Alejandra Ruiz-Rocha, wheat trading manager in Mexico for Cargill Inc [CARG.UL].

The loss of the Mexican market is hurting U.S. farmers in states like Kansas, where a severe drought slashed output this year. In the town of Chapman, in central Kansas, farmer Ken Wood said that prices dropped by 50 to 60 cents per bushel in a week late last month as farmers harvested their crops amid export market uncertainty.

“It’s frustrating. Mexico’s a natural market for us,” he said. “Break-even might be our best hope this year.”

Even if U.S. wheat regains its historic price advantage over more distant countries, some Mexican demand may already be lost.

Ailil Delgado, the owner of Panefilos, an artisanal bread shop in Guadalajara, said she would be willing to pay more for flour free of American wheat. Her customers, too, would accept higher bread prices to express their anger over U.S. trade and immigration policies, she said.

“I would definitely pay a higher price so long as quality standards are met,” Delgado said, “and specifically as a way to teach Trump a lesson.”