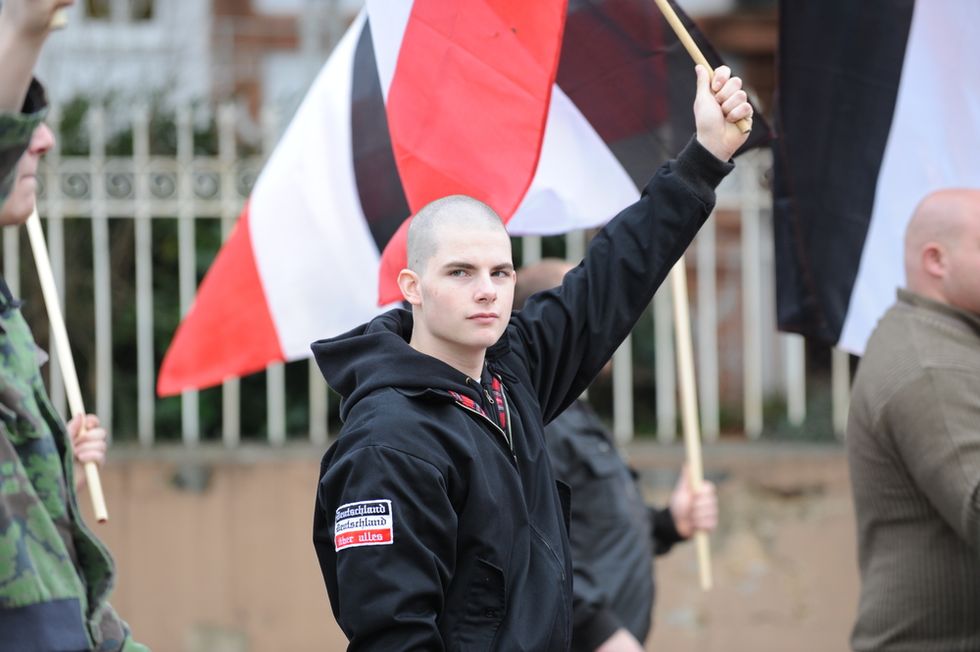 A skinhead waves a flag in Zweibruecken, Germany in 2009. Image via screengrab.

Not only did members of a white supremacist gang allegedly beat up a black man in a Pittsburgh bar for his race, but their GOP official leader was charged with doing the same thing in 2003.

Local news station KDKA reported that six or seven alleged members of the Keystone United gang beat up a man named Paul Morris outside a Pittsburgh bar earlier in July. The Citizen, a local Pittsburgh gazette, reported that witnesses at the Jackman Inn bar identified the gang members by their style of dress, insignia and skinhead looks.

Morris told The Citizen that he was at the bar to give a thank-you note to the kitchen manager for making food for his son's graduation party. He said that after the group made "vulgar comments" to him about his race, a group that consisted of both men and women jumped him and the kitchen manager who rushed to his aid. The group fled when someone said the police had been called — but not before Morris heard one of them identify themselves as "Neo-Nazis" who want to "eradicate" people of color.

The Daily Beast reported that Keystone United founder Steve Smith, an elected official within his county's Republican Party, was not at the scene of the crime when the alleged members attacked Morris. The founder of the white supremacist gang did, however, plead guilty to "terroristic threats" and "ethnic intimidation" after beating up a black man. He's currently listed as the group's "spokesman," per their website.

Smith only served 60 days in prison for the attack on a black man in Scranton, Pennsylvania, the Beast noted, and remained active with Keystone until 2012, when he "won an uncontested race for a committee seat in his county’s Republican party." He was re-elected in 2016 and celebrated his victory on the white supremacist Stormfront forum, the Southern Poverty Law Center reported.

Sometimes referred to as the "Keystone State Skinheads," the Beast reported that Keystone United members "travel en masse" to Donald Trump's rallies. Along with Smith,