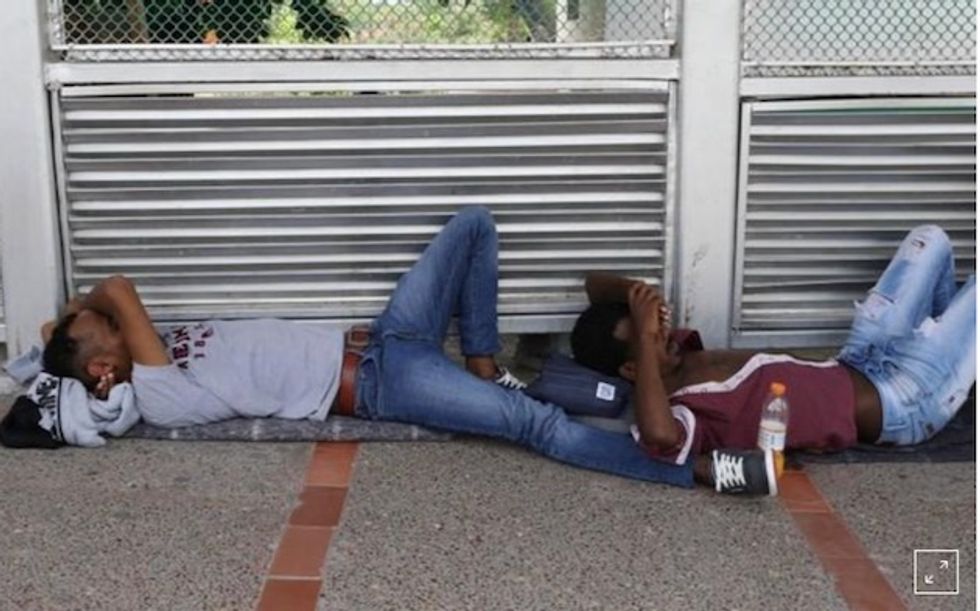 Eritrean men seeking asylum wait on the Mexican side of the Brownsville-Matamoros International Bridge after being denied entry by U.S. Customs and Border Protection officers near Brownsville, Texas, U.S., July 2, 2018. REUTERS/Loren Elliott

The U.S. government has been nearly uniformly detaining asylum seekers who were initially found to have credible fears of persecution instead of releasing them pending hearings on their individual cases as required, a federal judge ruled on Monday in a setback for the Trump administration.

The current release rate for the asylum seekers at five U.S. Immigrations and Customs Enforcement offices is approaching zero, compared with over 90 percent just a few years ago, Judge James Boasberg of the U.S. District Court for the District of Columbia said in a 38-page opinion.

The government could not explain the steep drop while claiming a release directive is in effect, Boasberg said.

Under the 2009 directive, undocumented migrants who can establish they may be persecuted in their home countries may be released from detention.

“Faced with the current record, the reasonable conclusion is that the five ICE field offices are not in fact putting this language into effect on the ground,” Boasberg wrote.

Detention has instead become the “default option” at the five offices, Boasberg said, siding with nine plaintiffs who have been awaiting asylum determinations.

The judge ordered the government to get on with case-by-case release reviews at ICE offices in Los Angeles; Detroit; Philadelphia; Newark, New Jersey; and El Paso, Texas.

“To mandate that ICE provide these baseline procedures to those entering our country - individuals who have often fled violence and persecution to seek safety on our shores - is no great judicial leap,” Boasberg said.

More than 1,000 asylum seekers are estimated to have been detained in districts overseen by the five ICE offices, according to lawyers who sued the government.

“This ruling means the Trump administration cannot use indefinite detention as a weapon to punish and deter asylum seekers,” said Michael Tan, an attorney with the American Civil Liberties Union, one of the groups that pressed the lawsuit.

ICE was not immediately available for comment on the judge’s opinion.

In May, the Trump administration began implementing a “zero tolerance” policy toward migrants seized trying to enter the United States illegally. The policy led to more than 2,000 children being separated from their parents. Under political pressure, President Donald Trump has issued an executive order for families swept up in immigration enforcement to be detained together.