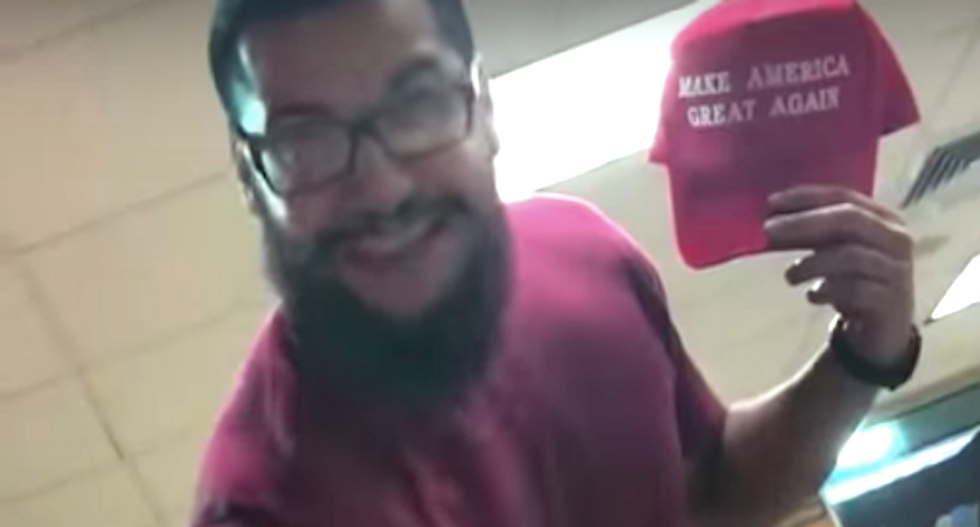 A Texas woman claims a stranger lashed out at her teenage son and his friends for wearing a "Make America Great Again" hat at a fast food restaurant.

Patricia Spittler posted a short video Wednesday showing a bearded man snatching away the Trump slogan hat and tossing a soft drink on the boys at Whataburger in San Antonio, reported KENS-TV.

"His friend was wearing a patriotic hat, and this happened!" Spittler posted on Facebook. "It would be nice to know who he is for someone to let him know his actions are not okay! Real tough guy... approaches a group of teenagers minding their own business just having a burger!"

Spittler asked for social media help in identifying the man, who she called the "scum bag of the year."

The video begins after the man snatched the teen's hat, and just before he picks up a full soda drink and forcefully tossing it toward the boy recording the encounter on his phone.

"You ain't supporting sh*t, n*gga," the man says, as he strides away smiling and looking at the red hat. "B*tch-ass motherf*cker, this is going to look great in my f*cking fireplace."

The camera then pans to a thin teenager who appears to be spooked by the encounter.

"Have fun with it," one of the boys says as the man walks out of the restaurant.

Spittler has since removed her video from public view, but another social media user posted it on YouTube.