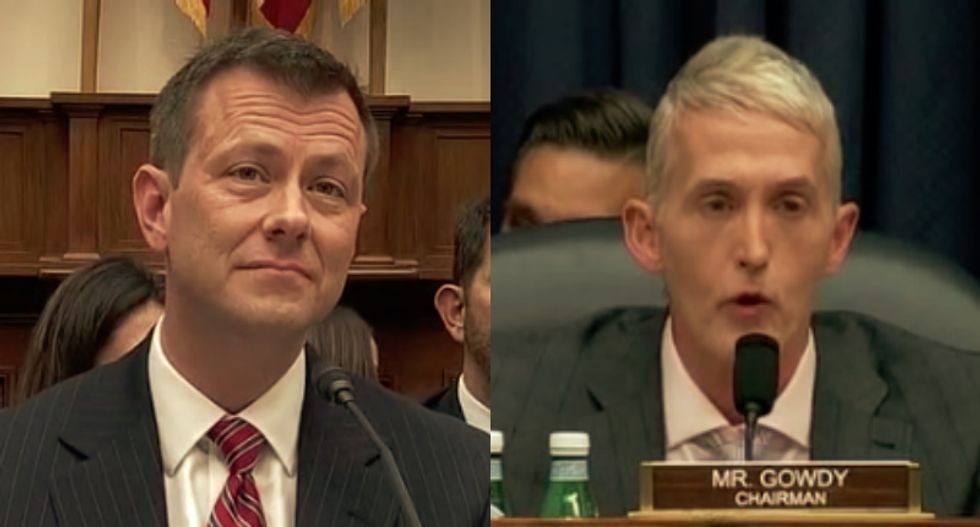 Rep. Trey Gowdy (R-SC) was apparently unsatisfied with a long-awaited answer provided to him by FBI agent Peter Strzok during his testimony Thursday — and his loud objections led the agent to school him in bureau protocol.

After FBI counsel advised Strzok that he could provide an answer to Gowdy's question about witness interviews conducted in the Russia investigation between the days of July 31 and August 6, 2016, the agent responded that he was unsure how many interviews occurred during that time period nearly two years ago.

"We waited all that time for that answer?" the South Carolina Republican asked.

Strzok later caught Gowdy in a misstep when the congressman asked him about the number of interviews he conducted between May 17 and May 22 in 2018 — only to ask again for the previous year.

Gowdy then explained why the dates are important to him.

"You used the word 'impeachment' on May the 18th, 2017, and you used the word 'impeachment' on May the 22nd, 2017, and your testimony is you can't recall a single interview you would have done that was supposed to lead to impeachment," the congressman said. "When you are prejudging not just a result but a punishment which is what impeachment is, prejudging the conviction and the sentencing when you have not conducted a single solitary interview, I'm sorry, Agent Strzok, but that is letting your bias impact your professional judgment."

"Sir, look, I never prejudged anything," Strzok responded. "Not in this case, not in any others."

"At the time, I was a deputy assistant director," the agent replied. "I had section chiefs, supervisors, agents, people who do interviews — not me. If something is notable or high level, I might be involved, but it would be rare if not never that I would typically get out there and conduct interviews."

"You mentioned the use of the word 'impeachment,'" Strzok continued. "That was used in the context of my not knowing what this would lead to. I was not prejudging impeachment when I used that term it was saying it might be nothing, it might lead all the way to —."

'Benedict Donald' Trump 'understood the stakes in the search warrant that was executed': MSNBC panel