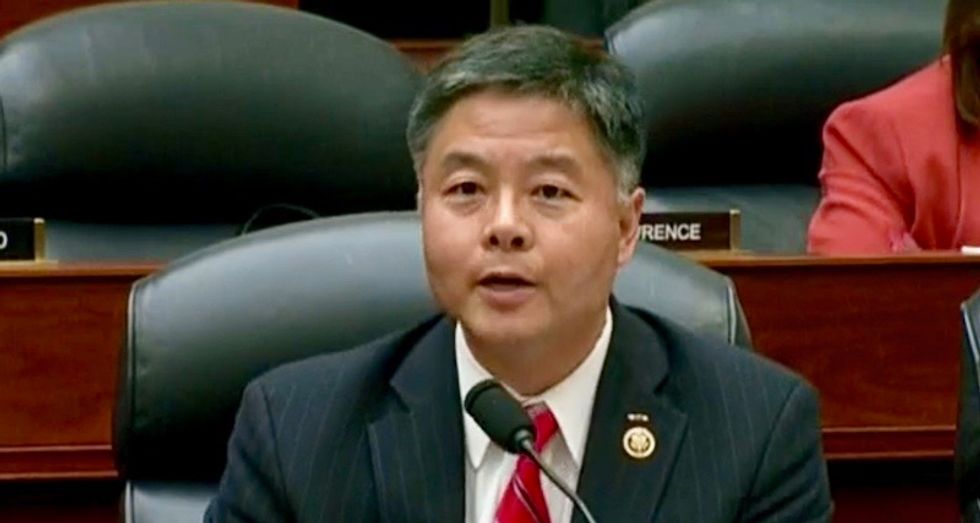 Thursday's Republican-led hearings into text messages sent by former FBI agent Peter Strzok have been full of fireworks as Republicans have gone to great lengths to insinuate that the investigation of Trump's ties to Russia was "biased."

U.S. Rep Ted W. Lieu (D-CA) opened his questioning of Peter Strzok by opening fire on the Republicans who are obsessed with text messages between two FBI agents but not the migrant children Trump still has locked in cages apart from their parents.

"Let me start by saying this is a stupid and ridiculous hearing," Lieu said. "The Judiciary Committee has jurisdiction over immigration. It's July 12th, 2018. As we sit here today there are nearly 3,000 babies and kids ripped away from their parents by the Trump administration and we're not doing a hearing on that. We're doing a hearing into the investigation of Hillary Clinton's e-mails in 2016. That's just dumb."

Lieu described the hearings as an unsuccessful fishing expedition.

Lieu brought up the bitter truth that Strzok may have been able to swing the election as he allegedly wanted to, by leaking the fact that the FBI was investigating Donald Trump's possible treasonous collusion with Russia.

"The one thing you could have done to cause him to lose is disclose the Russia investigation in July of 2016. Did you do that?" Lieu asked Strzok.

Lieu brought up the fact that, as a former prosecutor, he disliked certain defendants and found others to be fine, but that it did not affect how he prosecuted them.

"It didn't matter," he said. "All that mattered was could we prove a charge beyond a reasonable doubt."