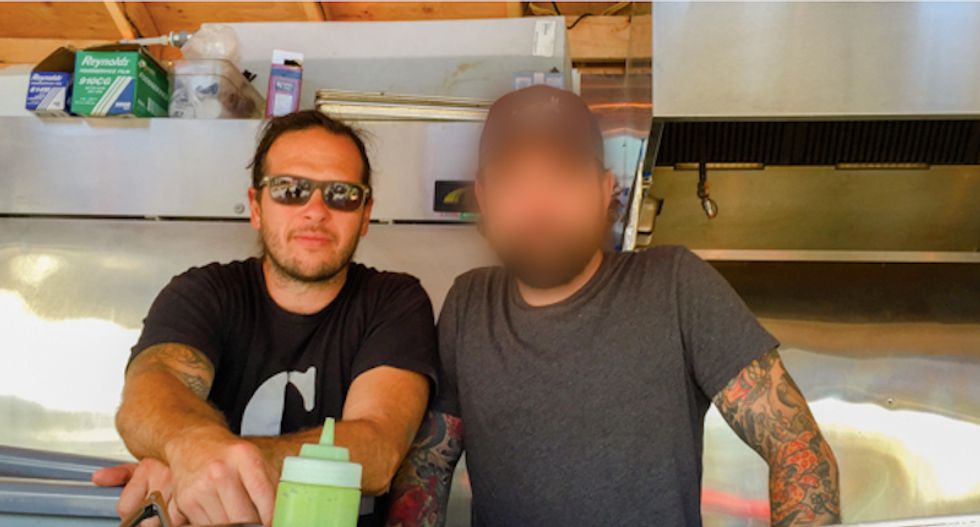 The co-owner of a chicken cart in Portland, Oregon, is being accused of hassling a black customer and calling the police on him, PDX Eater reports.

The story erupted on social media Wednesday after a passerby posted a picture of co-owner Dustin Knox, allegedly while he called the police to report Kevin Raysor—a black man—for loitering. The post went viral and multiple people replied with outraged comments.

In a separate NextDoor thread, another customer says she witnessed Knox threaten the man.

“Dustin started yelling at him, ‘if you don’t get out of here, I will snap your dog’s neck’” the woman wrote.

The accused loiterer himself replied in the comments.

"I was asked to leave the food court on the corner of Hawthorne for no reason... He said I was homeless and loitering... What I was doing was waiting for [Chicken & Guns] to open so I could eat before my final [exam]s.”

He added that the officer who asked him to leave was polite.

The man who posted about the incident to Facebook took it down at his friend's request, writing: "Earlier I had a post up about a food cart that hassled my friend Kevin Raysor. He's asked me to take it down so I have privated the post. I know this will disappoint some people.. but The same friend that I put it up to support asked me to take it down."

Around the country loitering laws are used to harass homeless people and people of color dating back to slavery.